What’s so funny? Giving your characters a historical sense of humour 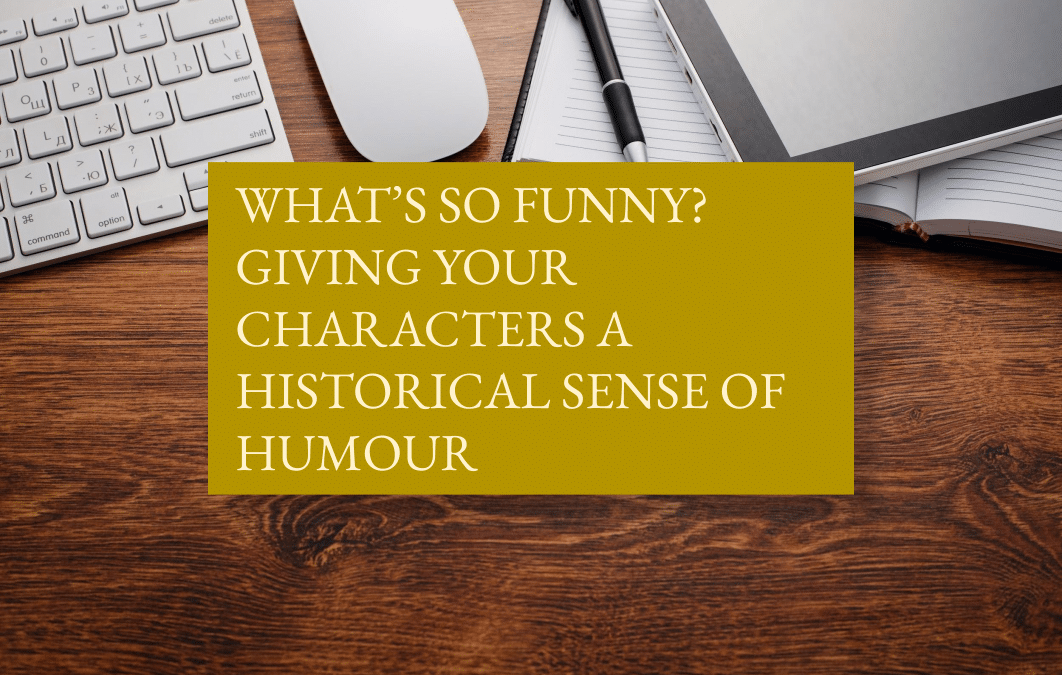 If 2020 has taught us anything, it’s that you’ve got to laugh. Laughter is a fantastic coping mechanism, a chance to bond with fellow humans… and one of the best ways to create memorable – and relatable – characters in storytelling.

Giving your characters a sense of humour reveals multidimensional sides to their personalities and relationships – and may even incite a chuckle from your readers. Perhaps there’s an element to the laughter that we dislike, or maybe your characters themselves are the butt of a joke. It also paints a rich picture of the period in which the story is set, as humour often reflects cultural values and tensions (or, in the case of the modern West, a genuine obsession with dog memes).

There’s a tendency in historical fiction to leave out those light-hearted moments (or sarcastic remarks) in a character’s story – especially in work that’s very plot-driven – and the belief that an insight into historical humour is beyond our reach doesn’t help.

So how do we access humour in the past, and what was there to laugh about? Wasn’t it all plague, war, and “bring out yer dead”? This guide will explain what tickled people’s funny bones in early modern times – the broad period from the late fifteenth century to the early nineteenth century, when the rise in print has allowed historians to access the finer details of culture.

The powers that be

Much like today, people in history viewed figures of power and influence with distrust, and poking fun at them provided an outlet for this.

Politicians, churchmen, doctors, and lawyers were popular subjects of jokes: high and mighty policy-makers were brought down a notch or two with jokes discussing their bodily functions; supposedly celibate churchmen were stereotyped as lecherous tempters out to steal your wife; lawyers were money-grabbers who wouldn’t think twice before accepting a bribe; and doctors were incapable, killing you with their “treatments” quicker than the illness itself would.

However, jests aimed at people in power are best shared between your like-minded characters. Uttered in the wrong company, a semi-innocent jab at the Pope in England, in 1555, for example, might be a great ending for your protagonist – if they’re fond of being burnt at the stake.

An Englishman, an Irishman, and a Scotsman

Lo and behold, (often-distasteful) comedy aimed at folk who are different from us is not a new thing. Foreign languages, accents, and customs might give your early modern characters the giggles and perhaps reflect their fear of the unknown, as this period saw an increase in the movement of people across borders.

Some very broad and offensive stereotypes existed in England. Supposedly, the French were lustful, the Italians were obsessed with revenge, and the Spanish were overly proud. Scots were barbaric, and there was nothing funnier than a Welshman speaking in his native tongue. The English, of course, were perfect.

Jokes about foreigners will change depending upon the social and political background of your story. The Jacobite uprisings, for instance, saw an increase in English satires depicting Scots as unsophisticated: “Sawney” was the derogatory name for a Scotsman, after the legend of Sawney Bean – the cave-dwelling Scot who fed his family on human flesh (not to be confused with Sean Bean, please).

Who wears the breeches?

Next up, and much expected, is humour surrounding gender identities. Entirely sexist, and often crude, cheap laughs about men and women transgressing their gender roles ultimately worked to maintain a stagnant social order.

Early modern wits loved to imagine what chaos would ensue were women to “wear the breeches”, as it were. It was well understood that female involvement in politics could only end in disaster. Women were far too emotional and would probably end up, I don’t know, trying to prevent a terrible war or something.

Men were not spared from the jokes either. Professions that were deemed feminine were fair game for banter. A common quip, for instance, was “nine tailors make a man”, as sewing was traditionally women’s work.

A question of class

Finally, it’s worth touching upon the distinction between upper- and lower-class humour across the period.

At the start of the early modern era, aristocratic individuals could be expected to openly laugh at similar things to everyone else, including practical jokes and slapstick. For example, the popular clown Dick Tarleton, famous for his hunch-back, cross-eyes, and flat nose, was also a favourite of Queen Elizabeth I’s.

Towards the end of the seventeenth century, however, the upper classes were desperately disassociating themselves from the earthy humour of the lower classes. No longer will your aspirational lady-in-waiting titter at bawdy jokes – not in public, at least.

Whereas at the start of the period, the gentry would have guffawed at someone with a disability or deformity, the sea-change towards manners shows a little more discretion and compassion in the jokes of the upper classes. In fact, laughter itself came to be seen as ill-bred. So, don’t have your Georgian courtier crying with laughter over some obscene jest – unless they’re heading down the social ladder.

All that’s left to say is, that if you’re stuck with historical humour, read Shakespeare. His comedies employ many of the themes I’ve mentioned – and are proof that folk from the past enjoyed a good laugh, though not always (or often) in good taste.

P.S. If you want more tips on accuracy and authenticity in historical fiction, make sure you download The History Quill’s full guide below.

Connie Rout graduated in History and nearly became a History teacher – before remembering that writing and research is where it’s at. She’s accidentally found herself on a Medieval History MA in York and, when not nose deep in Latin translations and Anglo-Saxon transcriptions, she also snatches time to pen her light-hearted history blog, Historical Allsorts.