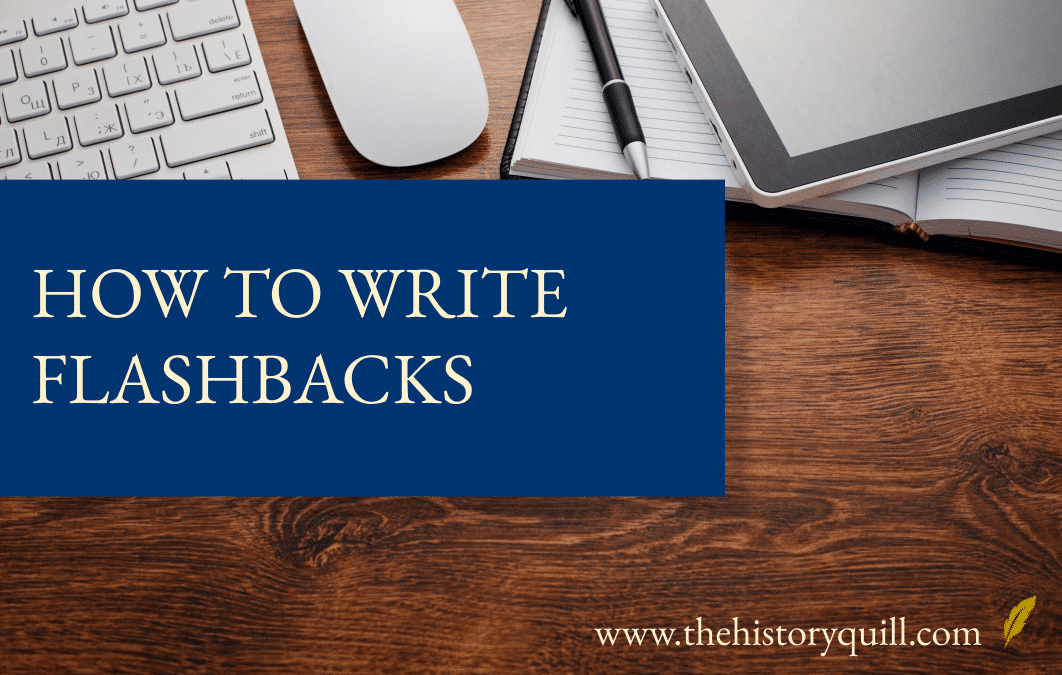 Flashbacks are an important part of storytelling, enabling writers to connect the events and actions of the present to things that have happened in the past. They’re a particularly useful tool for demonstrating character motivations and introducing plot twists. If done right, they can pack a powerful emotional punch and pull the reader further into your story.

That said, they’re easy to get wrong. Some writers overuse them, and others don’t know where to put them. If written carelessly, they can be jarring and tiresome, leaving the reader feeling confused and irritated rather than engaged.

So, here’s how to get them right…

First, how do we properly introduce flashbacks? The classic technique is to present them as if the character is remembering a previous experience. Here, the flashback should occur as part of a chapter set in the present, with points of transition at the beginning and end.

An alternative technique is for the character to actually view the past, perhaps through some sort of portal or using magic. This is do-able in books where there’s an element of the supernatural, or if there’s an invented technology that makes it possible. Obviously, it wouldn’t normally work in historical fiction unless you’re writing a time-slip or a supernatural take on the genre.

Another technique is for the character to dream their flashback. A dream can take place within a chapter (usually, but not always, at the beginning or the end), or it can be its own chapter. Dreams should usually feature a distorted representation of reality, so the memory shouldn’t necessarily appear exactly as it happened. There’s plenty of scope for symbolism here too (i.e. rather than literal depictions of events).

One final thought: if you’re using the classic technique and you choose to put the flashback in its own dedicated chapter with no transitions, then it’s essentially a second timeline rather than a flashback.

The reader needs to care about your character in the present before they care about their past. The same goes for the plot. For this reason, putting a flashback in the first three or four chapters is usually a mistake. They’re best avoided until at least the second half of the first act, at which point most of your main characters will have been introduced and your plot should have started in earnest. Even then, tread lightly.

Even if you’ve got the timing right, your reader might still lose patience with your flashbacks. Usually this happens if you make them too frequent or too long. If you spend too much time in the past, your reader might start to wonder which narrative they’re supposed to be most invested in – the real story unfolding in the present, or the story in the past that you keep making them revisit. It can also slow down the present-day story to such an extent that it feels like it’s never going to get to the point.

Flashbacks should be used sparingly, and they should only provide a snapshot of the past. If you really feel that a lot of flashbacks are essential to your story, consider writing a dual timeline instead.

Is a flashback necessary? Is it the right tool?

It’s often tempting for writers to provide too much backstory (which often means too many flashbacks). Because they’ve put such a lot of effort into creating their characters and building their story, they feel the need to tell the reader everything. Did the protagonist lose their wife? Better have a flashback. Was the protagonist wounded in combat? Better have a flashback. But why? How does it actually advance the story or substantively enhance our understanding of the character?

Always ask yourself whether a flashback is necessary. What’s its value for the reader? How does it advance the story? If there’s a clear purpose and a clear value, go for it. If not, consider leaving it out.

It’s also worth remembering that, if you want to flesh out the backstory a little more, flashbacks aren’t the only technique available to you. There are other options that can be less jarring, such as providing backstory through dialogue (as long as it fits with the context), internal thought, and even narrative exposition. Don’t overuse these techniques either, but remember that flashbacks are just one tool among many.

If you’re sure that flashbacks are the right technique, make sure you manage the transitions well (i.e. the transition from the present-day story to remembering the past and back again) A flawed transition can be really jarring for your reader.

Here are three methods you can use to make sure a transition works well:

1) Change tense at the beginning of a transition. For example:

I was here two years ago, but things were very different then. It was summer, and I’d gone riding with Isabelle. “Let’s ride all the way to Grantchester,” she said, to which I was happy to agree.

Note how I use the past perfect tense (“I’d gone”) only once to mark the transition. Don’t keep on using it! Past perfect becomes grating if it goes on for too long. You may choose to switch back to past perfect just before you transition out of the flashback, but it’s not always necessary.

If you’re writing in present tense, the best approach is to switch to the simple past tense for the entire flashback. It doesn’t grate like past perfect does.

In both cases, changing tense signals to the reader that you’re shifting to a different period in time.

2) Use a sensory cue to mark the transitions. For example:

The cold bit at my hands as I walked on. I was here two years ago, but things were very different then. It was summer, and I’d gone riding with Isabelle. “Let’s ride all the way to Grantchester,” she said, to which I was happy to agree. We rested there for the afternoon before returning home. The last time we would ever go back home together.

I pushed on through the snow, rubbing my hands together as I moved. It was still a long way to Grantchester, and this time I had no horse.

Here, the cold serves to separate past from present. In the flashback, it’s summer. But, in the present, it’s cold and snowy. Reminding the reader of this during the transitions will help to show them when we’re moving back and forth.

3) Use triggers to mark the transitions. For example:

The cold bit at my hands as I walked on. I was here two years ago, but things were very different then. It was summer, and I’d gone riding with Isabelle. “Let’s ride all the way to Grantchester,” she said, to which I was happy to agree. We rested there for the afternoon before returning home. The last time we would ever go back home together.

Crunch. My foot landed in a pile of snow. It was inches thick all down the path, but I had to push on. It was still a long way to Grantchester, and this time I had no horse.

Here, the familiarity of the place already serves the purpose of triggering the narrator’s flashback, while the crunch of the snow now brings him out of it.