The order of things: how to fashion a plot out of a real person’s life 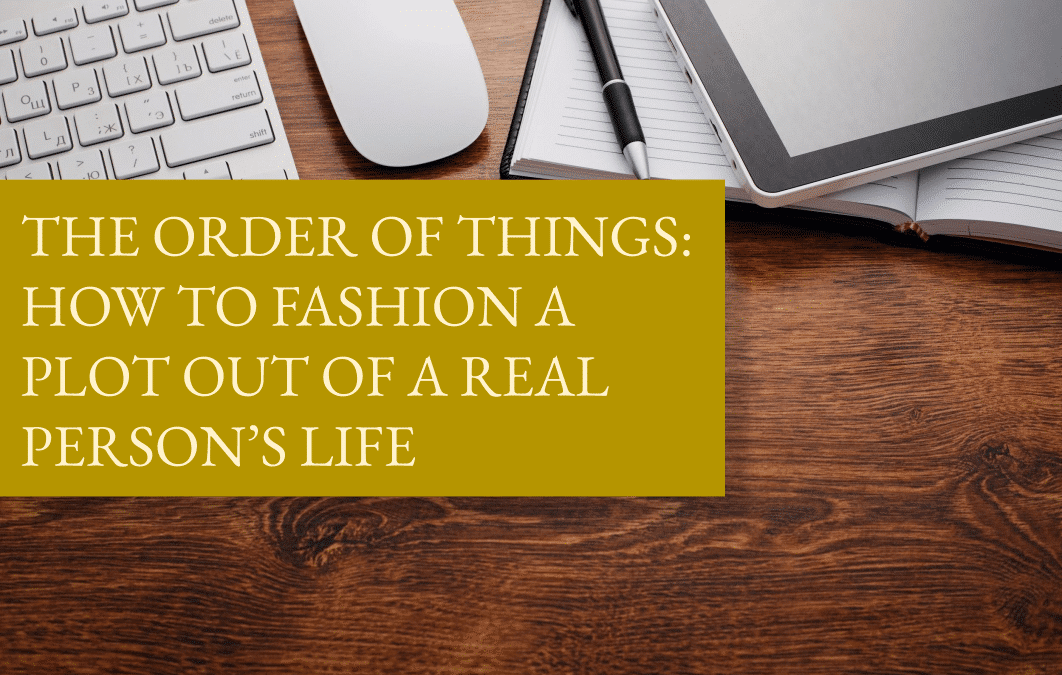 Historical fiction, as we know, is that fusion of history and story, fact and fiction coming together to offer a fascinating insight into the lives of those who’ve come before us – real or imagined – set against a background of delicious historical detail. Love it, right?

The question for writers of historical fiction, though, is what to do when the timeline of history and the conventions of story just won’t fit neatly together.  Margaret Atwood wasn’t far off the mark when she said, “If nothing is happening by page ten, you’re in trouble” – and often, with history, be it collective or individual, nothing does happen until long after page ten or beyond.  History, fascinating though it is in retrospect, is – while it’s actually happening – messy, drawn-out, and mostly tedious. Bursts of action punctuate long stretches where, frankly, nothing much happens.

If you’re writing about a particular life or series of events, how can you make interesting those long stretches when nothing much happens – or place the fits and starts of a real life onto the smooth arc of exposition, rising action, climax, falling action, resolution?

The protagonist of my current work-in-progress lived an extraordinary life that was messy, chaotic, repetitive, fragmented and confusing. And while I want to shed light on her individual history, I don’t want to end up with a story that is also messy, chaotic, repetitive, fragmented and confusing. No one wants that, not least the reader.

I wrestled for a long time – too long, probably – about how to sort this all out. And then a writer friend asked me a simple question: was I writing a novel or a biography?  This blindingly obvious distinction clarified everything. The responsibility of the biographer is to assemble the available information about a person into an account of that life. An accurate, historically verifiable account.

The responsibility of the novelist?  To tell stories.  End of… well, end of story.

Too simple?  Of course it is.  But, like most wild generalisations, it’s basically true.  And as Mark Twain may or may not have said, one should “never let the truth get in the way of a good story.”  So I’ve ended up doing a spot or two of judicious reorganising – keeping the trajectory more or less the same, but moving my protagonist along a smoother, more ‘literary’ story arc than her personal history allowed.

It’s sometimes easy to conflate the events of the past with the historiography, the writing of history, which selects and discards, orders and curates, those ‘raw’ events into the historian’s own narrative.  Events have to be written into a history we can then point to as ‘true,’ maintaining the illusion that it is simply an account, rather than a narrative with its own constraints and corruptions. The history that we love to read and discover has already been edited to focus on the action, the steps forward, the juicy bits.

Story, on the other hand, comes with its own expectations and conventions – the story arc, the however-many plot archetypes, the beginning-middle-and-end model that we all know and love.  And we know they’re not ‘real.’ Stories are recognisable creatures, with familiar ways of doing things – even when the detail of those stories retains the ability to surprise and delight. They move stuff around, look back, jump forward, repeat themselves, miss bit outs.  And by their very nature they’re chock-full of action, steps forward, juicy bits.

Does the re-ordering of events matter?  I suppose it all depends on where we put the emphasis in historical fiction. If we’re emphasising the historical, depicting history accurately and in order – isn’t that just history?

But if the emphasis in historical fiction is on the fiction, then isn’t it about story, narrative and character? Another wild generalisation, but readers of fiction want to be engaged in a story, to lose – or find – themselves, to empathise and identify.  If, as F. Scott Fitzgerald reckoned, “character is plot, plot is character,” then it matters how your characters react to events much more than the order in which those events actually happened.  The creation of credible character – or, in the case of so much historical fiction, the re-creation of a real person into a character – is at the heart of so much fiction, so can take precedence over an overly-rigid adherence to chronological order.

I’m not, of course, advocating changing the order of things just for the sake of it – or messing with the big picture of history in a way that distorts or misleads.  But even Hilary Mantel admits to the occasional tweak here and there when the events need to fit the character development, rather than the other way round – and always for the sake of the story.

There will always and inevitably be a degree of tension between history and story. But it’s a productive, creative tension, and one that acknowledges the overlap that the words – story, history – themselves highlight. The history of a place and time is more than a background for story because it is already a kind of story in itself: it has already been written and re-written.  The history of an individual can provide an intriguing backbone for a story, but the novelist’s job is to put flesh on those bones. And perhaps add a historically accurate waistcoat.

Pippa Brush Chappell is a regular guest contributor to The History Quill. She is a writing coach and tutor, who reads and writes historical fiction. She is particularly interested in questions of voice and in the lives of women through the ages. Her current work in progress is based on the life of a woman who travelled widely in the 17th century. Say hello on Twitter at @pippabc.