Prologue or no prologue? An answer for historical fiction writers 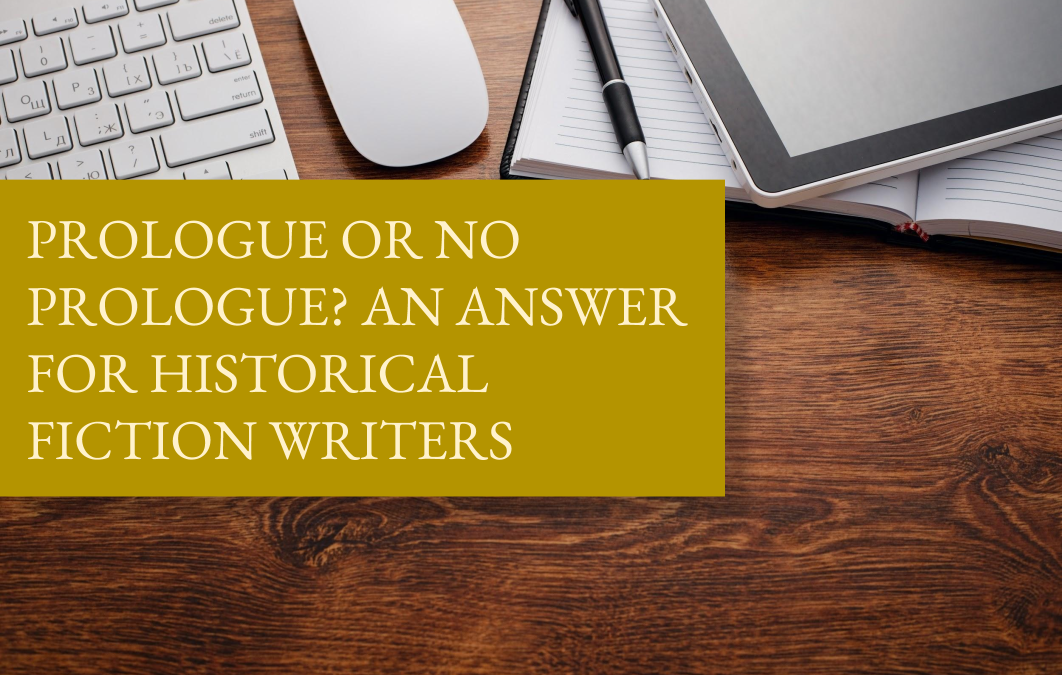 It is a truth universally acknowledged, it seems, that editors and agents and readers don’t like prologues. Don’t like them, don’t need them, don’t read them. But if this is true, why do writers keep writing them? What purpose do they serve? And how come they have such a bad reputation?

The answer to the bad reputation question is easy. Info-dumping. A prologue can be an exceedingly tempting box into which writers can dump all that lovely research, all those world-building details, all that background, back story, extra bits, childhood memories, you name it, in the misguided hope that it will mean they don’t then have to weave them skilfully and subtly into their main narrative. Want to know why our hero doesn’t like mice? It’s in the prologue! Losing track of why our heroine is having to marry that strange old man? Well, if you’d only read the prologue properly…

The prologue presents a very particular challenge for writers of historical fiction. The temptation to cram a whole novel’s worth of world building into a few short pages, with layer upon layer of period detail, historical facts, careful research, is one that it is understandably hard to resist. And you’ve got to get that all in somewhere, right? A prologue feels like such a convenient way to transport the reader to the 1120s, or the 1950s, or the 1660s, or wherever it is they need to go.

But readers of historical fiction are discerning folk: if they wanted a history lesson, they’d find a history text to teach them. What they’re after is a good read, an immersive experience, a feeling of being shown the characters in their own world – not a lesson in how different it is from the world readers inhabit themselves. They probably know that already. But now they want to feel it.

Lisa O’Donnell, writing on the Curtis Brown Creative website, makes a useful distinction: “Sometimes prologues are clearly the information the author needed to get going on the writing of the novel – rather than the information that the reader needs to find their way in. While I think it’s important that an author has knowledge of the world they are writing and the characters they have created, not all of that ‘knowing’ needs to be on the page.” If all the prologue is doing is setting the scene for the writer, showing off the detail and scope of their historical research, then it’s probably best avoided. It might well be important to write that gloriously detailed and research-heavy prologue, but it’s likely even more important to recognise it for what it is – and to keep it to yourself.

Thing is, a well-written prologue can do all manner of things: set up context, whether geographical or temporal; offer an important nugget of back story; set up a mystery; establish tone and theme; and so much more. But a badly-written one can simply feel like the great big book of instructions you have to read before you actually get to plug in your new TV: you know you should read it, but really? Surely you can figure it out on your own. And of course, if the reader can figure it out on their own, then the prologue needs to be filed under ‘darlings that need to be killed’ and dispatched forthwith.

So what does a well-written prologue actually do? And what does one look like? What does it add?

A prologue can help the reader understand an event that happens before the main action of the novel but that is significantly out of step with the timeline of the narrative. This can help explain later actions and events, or it can outline the catalyst for those events. For example, readers are shown the childhood trauma of the protagonist which explains her behaviour later in life, or they see the crime in the prologue that the sleuth in the novel then comes to investigate. Careful foreshadowing, in a well-written prologue, can add nuance and complexity to a narrative, investing readers completely in the process of realising whether or not their hunches are well-founded.

But it doesn’t even have to be in the past. In fact, some of the most effective prologues actually tell readers the end of the story, and the main narrative itself takes the reader back to where it all began. Of course, this adds a delicious layer of dramatic irony – and what reader doesn’t love knowing just how wrong the characters are getting things, or understanding what is at stake that the characters themselves don’t realise? Again, a well-written prologue can draw readers in to a much more engaged experience of the story, working within it to create meaning, tension and drama.

A prologue can, too, draw the reader into themes and ideas that will be important in the main narrative. It can set the tone for what is about to come and put the reader in just the right frame of mind for the story to begin. A well-focused prologue means a well-focused reader: the writer can get them looking in just the right direction for the action to start. A prologue can be a spotlight, drawing the audience’s attention to the right corner of the stage, just before the main lights come on and they realise that the actors are all there, waiting for their audience and ready to begin.

If it works, it works. If the novel is better for it, then it’s all to the good. If the reader is wiser for it, same applies. But if the only person who needs the prologue to be there is the writer, then it has to go. Maybe it’s not that editors and critics and readers don’t like prologues. It’s that they don’t like unnecessary ones, or clumsy ones, or lazy ones. And, to be honest, no one likes that in the main narrative either.

Done well, a prologue can take your reader right back in time to exactly where you want them to be. It can be the opening of a door into the world of the narrative, where and when the characters live and the action happens. Done not so well, it can be a barrier to the same, an impenetrable thicket of brambles through which you’re asking the reader to hack in order to reach the castle – and maybe the sleeping princess – on the other side.

Pippa Brush Chappell is a regular guest contributor to The History Quill. She is a writing coach and tutor, who reads and writes historical fiction. She is particularly interested in questions of voice and in the lives of women through the ages. Her current work in progress is based on the life of a woman who travelled widely in the 17th century. Say hello on Twitter at @pippabc.