Your horse is not a car: a guide to writing about horses in historical fiction 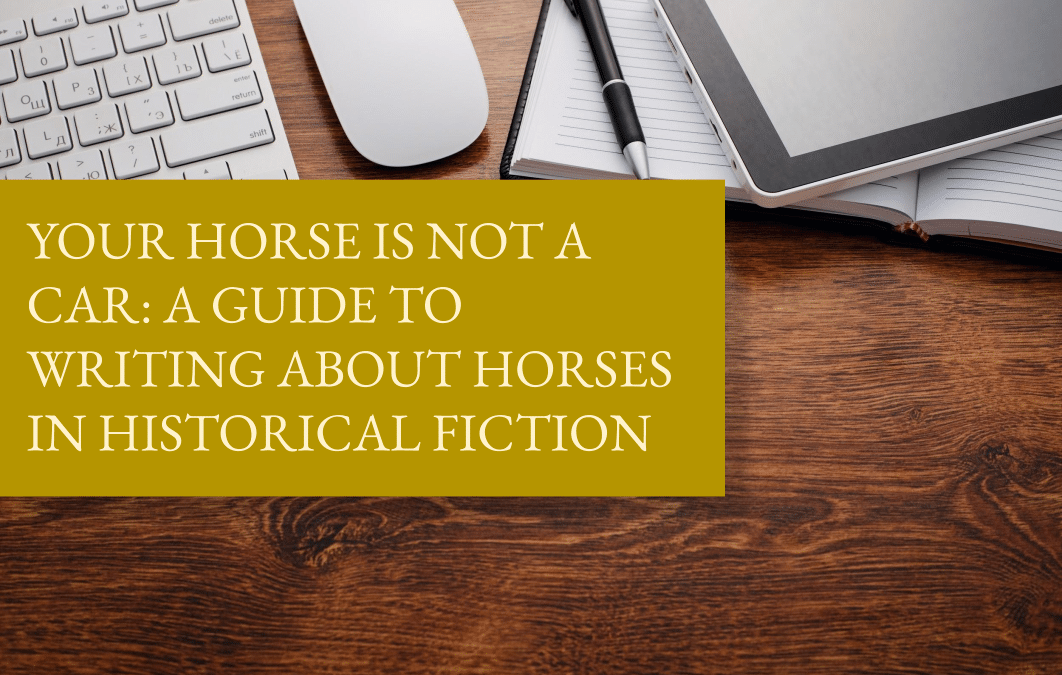 Unless your historical novel is set in a single location, your characters are going to need to travel. And that means horses. Till the turn of the century, the horse dominated the way we travelled, and in rural areas, that continued right up to the start of WW2.

It’s a pity that there are some published novels out there that might have the most meticulously researched clothes, etiquette and language, but will still fall down when they write about horses travelling impossible distances, like some hay-fed rocket.

Your horse is not a car

In this post we’ll be looking at the limitations and practicalities of horses. A lot of the time in literature, horses are used just as a convenient plot device to travel from place to place. But in doing so, you rob your reader of vital immersion and risk damaging your story’s credibility. But if you get it right, you add another minor character that your readers can love.

Horses do not have wings

Keep it consistent.  One of the logistical challenges faced by any writer of historical fiction is figuring out distances and times of travel. If it is around 200 miles from London to York, then it should be impossible for any would-be Dick Turpin to travel there overnight.

Weather and road conditions will all influence how far your characters can travel in a day. A single rider can reasonably expect to cover about 30 miles per day if they’re treating their horse fairly well (not faffing around, but not being too harsh on the beast).

However, if they are being pushed to their limits, then you can get up to 60-70 miles per day from a well-bred light horse. This isn’t sustainable, and you might lose a couple of horses along the way.  Which brings me to my next point:

Horses are not immortal

If you’re looking to portray an accurate reflection of your time period, this isn’t something to shy away from. With our modern sensibilities, we may balk at the realities of historical horsemanship, but again this is something to consider when writing.

Horses get tired.  A Mongol soldier would have between four and six horses and alternate between riding them to make sure that one horse would not become too knackered. Likewise, knights on campaign in Europe would have several horses – one warhorse for battle and multiple riding horses.

For reasons of weight and mobility, horses were often much less heavily armoured than their riders. This, of course, made them far more vulnerable to arrows, spears or the lances of other horsemen. When you write your battle scenes, make sure you give your readers a full, visceral experience. Mounds of dead and dying soldiers may seem less credible if their horses all seem to get away unscathed.

Equine psychology is an incredibly complex topic and one far beyond the scope of a single blog post. However, the one emotion that dominates a horse’s mind is this: fear.

In an incredibly short space of time, humans have taken a fairly small animal (the Tarpan, around 55” at the shoulder) and turned it into a very big animal (the Shire Horse, measuring 68”at the shoulder). The problem is, horses don’t realise this. They still think and react like a prey animal.

The Battle of Hastings re-enactment. The Norman knights are trained riders riding trained horses with an opposing “army” who are told under no uncertain terms not to hit or endanger the horses. (horses are expensive, re-enactors are plentiful – but I digress.) These are stunt or ex-police horses.  Even with these favourable conditions and extensive modern health and safety, there are still accidents. Riders fall off, horses decide to run the other way.  My point is this  – things go wrong. You are dealing with an emotional, living creature with its own finely-honed self-preservation instinct.

Horses can spook at a plastic bag! You don’t need to waste pages and pages on a mount’s thoughts and inner turmoil, but don’t portray them as just unfeeling automata.

Stuff can go wrong, and horses have needs

Lameness is the obvious problem, but there are a basketful of other things that can go wrong with any horse. Botulism from spoiled hay. Lice and other parasites. Colic for horses can be deathly serious, with crippling abdominal pain.

Horses need Shoeing every 4-6 weeks. In the same way that you don’t need to depict your protagonist buying new socks when they wear out, you don’t need to go into this level of detail. But if they have been riding or travelling on campaign for months at a time, this is an important issue.

Ditto with food and mucking out. A horse needs 5-10 gallons of fresh water and 15-20 lbs of hay per day. And it has to come out somewhere.

If you ever want a truly disgusting experience, research into the conditions in William the Conqueror’s camp in Normandy.  Mountains of horse manure contributed to dysentery and other foul afflictions in the Norman camp.

As a final point, unless your protagonist is a complete sociopath, chances are they care deeply about their mount. If you spend day in, day out around an animal, you are going to bond with it. The story doesn’t need to degenerate into Black Beauty fan fiction, but it is at least worth the odd line about how they interact with the horses around them.

Bernard Cornwell is one of the masters of historical fiction. For a great example of interaction, look at one of his most well-known characters, Uthred of Bebbanburg.  Uthred is, by anyone’s standards, a violent and grumpy man. Written from his first person perspective, the books describe him snarling at those around him and his blunt and sometimes brutal mannerisms. However, Cornwell does a superb job of depicting Uthred’s relationship with the animals around him. From his hound Thor to Witnere and Smoca, two warhorses. Sure, he might hate priests and kill them “the way other men swat wasps”, but he has a soft spot for animals.

From the way that Uthred describes the horses, we also gain a vital insight into his own personality. When he praises Smoca’s aggression and vicious biting in battle, we get to see what the protagonist values. Use this in your own writing to give your readers a glimpse of what your own characters hold dear.

To conclude, horses are living, breathing creatures. They deserve to be as exciting and interesting as everything else in your world. If you make the effort to depict them realistically, your readers will appreciate your attention to detail and feel even more immersed in the world you’ve created for them.

Jack Shannon is a regular guest contributor to The History Quill. He is currently elbow deep in the editing process for Brigandine – a dark, bloody fantasy where unfortunately for the protagonist (and everyone else), magic is returning to the land of Ashenfell. Unsurprisingly, there are also plenty of horses.

P.S. For more guidance on accuracy and authenticity in historical fiction, make sure you download our guide below.