You are what you wear: the role of clothing in historical fiction 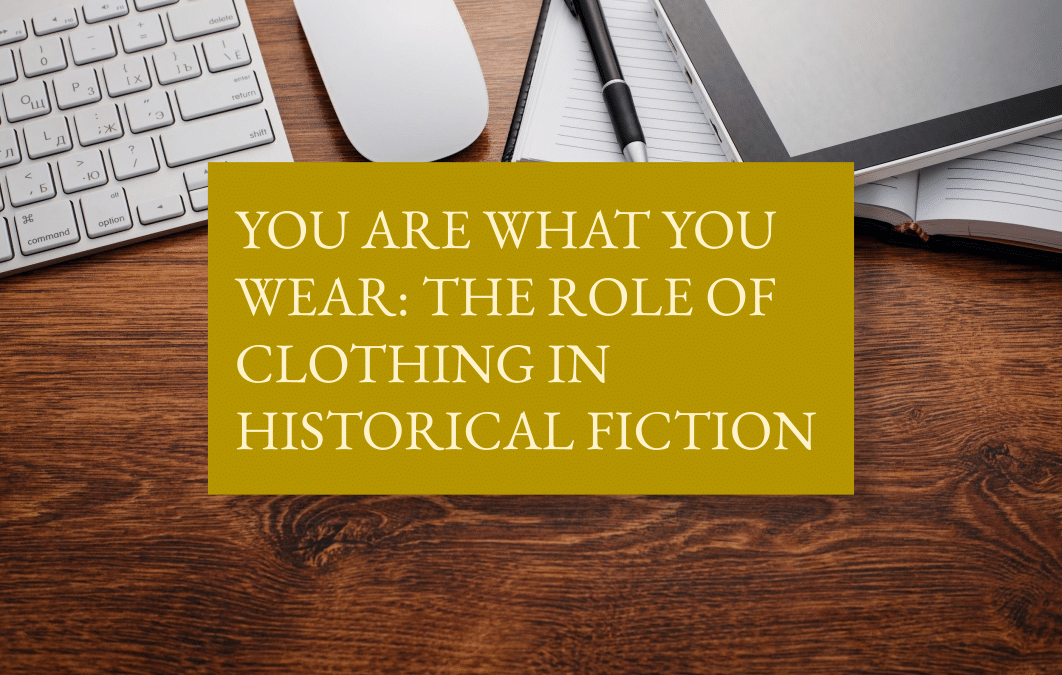 Oscar Wilde suggested that ‘You can never be overdressed or overeducated’, but the first part of that statement is wrong, especially if you’re a character in historical fiction.

As an English Literature graduate, I have spent the past few years jumping between different periods of history and delving into their rich stories. Having studied the great literature from the medieval to contemporary eras, I’ve learnt that one of the most natural and unconscious ways in which we paint the past as writers is through how we dress our characters. This is a key way of attempting to authenticate a time and place. In history, you are what you wear, and knowing your stuff about historical fashion is vital in making your novel a credible success.

We dress in ways that showcase our identities, so why wouldn’t we dress our characters the same way? As writers, it is our job to create a visual image for our readers from which they can make sense of each character’s personality, too. Simply, the clothing they wear is as important as what they say! From a bustle on the back of a Victorian to the chainmail of a medieval knight, the clothing our characters wear ultimately determines whether they are fully immersed or faintly placed in their setting. Writers can use clothing to subtly suggest so much about characters’ individuality. Is a shirt unbuttoned? Is she not wearing a corset? What does this say about the character?

Clothing is a vital signifier of context: what period are your characters living in? What is going on in the wider world? The clothing your characters don – like an Edwardian lady with a tricolour sash – informs the reader of a political landscape surrounding the centre of your story. Although fashion can act as a form of defiance, in some periods, fashion was also governed by rules which we call sumptuary laws.

What are sumptuary laws? In Britain, France, Italy and Colonial America, sumptuary laws were a means through which the clothing of everyone in a society was regulated up until the 1800s, when the rules were repealed. Restrictions on clothing still exist in some corners of the world, but for the vast majority, sumptuary laws are a forgotten part of history which only touched a few countries. Each item, its fabric and colour, denotes one’s class, gender, profession and ultimately one’s place in the world. These are such important rules to follow as you describe your characters. In centuries governed by sumptuary laws, rules are strict so look closely! For example, in Tudor and Stuart England, purple was only allowed to be worn by the monarchy.

Beyond the legal requirements, clothing historically acts as a form of symbolism, emphasising power and asserting one’s own values. An example of symbolism can be found in the paintings of Queen Elizabeth I. Some of the most famous pieces – such as The Rainbow Portrait by Isaac Oliver – depict fashion at its most excessive heights, but each splash of paint is flecked with iconography. The eyes and ears on her dress inform her subjects that she is watching their every move; a snake on the Queen’s sleeve connotes the serpent of wisdom in mythology; a pearl necklace symbolises the Virgin Queen’s purity. This is a singular example of how clothing plays a significant role in providing weight and position to the otherwise blank canvas of a body. Every inch of fabric weaves detail into the story we present to the world.

The finer details of fashion facts

There are, of course, some important examples of fashion that we need to remember when writing historical fiction.

1. Formalwear and everyday wear are not the same thing. We may envisage an image of ladies piling fruit onto their wigs or men wearing codpieces, but these were not everyday occurrences. These are stereotypical images of an era.

2. Western fashion significantly differed from Eastern clothing. Although we live in an age of commodification and access to Western clothing is widespread through the Internet, the fashion in one part of the world would have varied hugely from that south of the equator or in the East. Therefore, it is vital that when researching for a specific period, we don’t make the blind assumption that what one wore in Victorian Japan would be the same as in Victorian Britain.

3. For anyone who is writing about war in their novel, something that few realise is that military uniforms in Britain originated in the 1600s. Although there may have been essential items before then such as chainmail, there was no standardisation of what was worn in battle. Because of this, soldiers wore whatever they could access – so consider this when you’re writing about the Battle of Bosworth or Hastings!

Whilst a lady may wear trousers as a land worker in the Second World War, we cannot take liberties in assuming that an item worn in this period would have been worn in earlier centuries under similar circumstances! It is important that we have our creative freedom. However, if you are marketing your story as a piece of authentic historical fiction and are rooting it within this world and not a parallel universe, then every stitch counts. If you are going to research artillery or transportation, you need to also research the clothing that a character will be wearing as they ride through the country or fire a canon. If you feel inspired by this, consider how Hilary Mantel or Margaret Atwood talk about their own detailed research. Atwood notes that if you make one error in your historical accuracy, ‘it throws the reader off… And believe me, if it’s not accurate, somebody is going to write you a letter’.

As writers, it is our responsibility to create the most immersive and realistic world possible. Just as you would not include a phone in the Tudor period, you wouldn’t dare to write about yoga pants in Victorian London. Not only would a fashion faux pas like this break the authenticity of your world, but it would also undermine your authorial voice. After all, that is the last thing any writer wants.

Holly Peckitt is a guest contributor to The History Quill. Recently she graduated from Bangor University with an MA English Literature, having previously studied for a BA (Hons) in Literature with Creative Writing. Holly is a freelance writer and also a poet, and she has had her poetry published in several journals. When not working as a freelance writer, she can be found working on her first novel set in the Edwardian era, gardening and reading.