What makes a great villain? 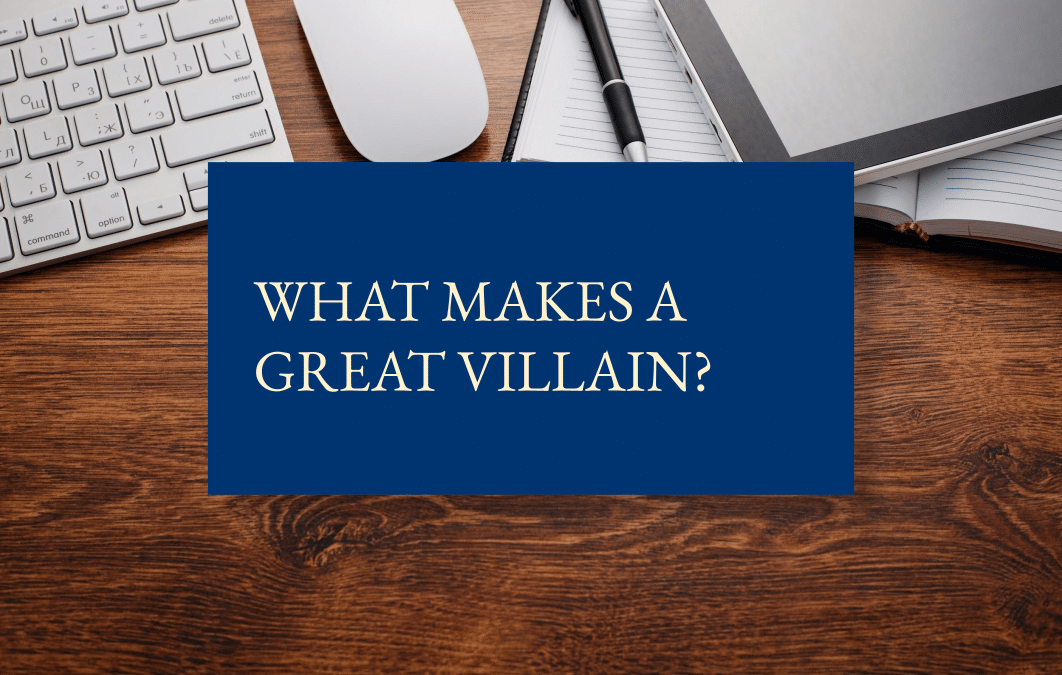 No matter how great a hero, no matter what they can achieve, what separates the good stories from the great is the quality of the antagonist. Look at Star Wars – Darth Vader was so popular George Lucas went and made three films about him specifically. Whatever your thoughts on the prequel films, if audiences hadn’t responded to the character, they wouldn’t have been made.

All stories need an antagonist, but the antagonist doesn’t necessarily need to be a person. It could be the environment the hero finds themselves in, their own inner demons, society itself. A villain is a type of antagonist: the “bad guy” who opposes the hero of the story and causes problems.

From a reader’s perspective, what makes a villain compelling is their depth. They need to be someone with backstory and motivations that go beyond simply stopping the hero. This all influences the sort of troublemaker they are and the journey they go on. Are they the embodiment of evil? Are they a friend who betrays the hero? Are they the exact opposite of the hero, or very alike? Will they be redeemed, or stay a villain?

So, if the primary antagonist in your story is a person, you might want to ask yourself: “What sort of villain should the story have?”

The types of villain

There are many types of villain. There are the ones readers know are bad from the outset; the ones who are revealed to be bad at the very end; there are even the ones who seem to change sides like other people change clothes. But just as there’s a number of standard plots, so there’s a handful of tried and trusted types of villains, each offering something different to writers (and their readers).

This is perhaps the most straightforward of villains – someone who represents the complete antithesis of the hero. The conflict comes from the natural clashes that occur when one person’s beliefs are in direct contradiction to another’s.

In Andrew Miller’s Now We Shall Be Entirely Free, the novel’s protagonist, Captain John Lacroix, is a survivor of the 1809 retreat to Corunna, fleeing atrocity and his own failings. Sent to bring him to justice are Medina, a Spanish lieutenant, and Calley, a British corporal.

Calley’s upbringing and background mark him out as different to Lacroix, but that alone does not make the former a villain. Rather, it is the way they react differently to similar actions that mark them out as on two opposing sides. Lacroix is wracked with guilt for what he has seen and done, whereas Calley has little concern with the morality of his actions. Lying, thieving and killing are merely means to an end – his personal survival.

The reader is made aware of this early on. Calley is called to give evidence of atrocity to a board of inquiry, and in his telling he recounts how he and another soldier had become separated from their unit. He describes trading with a farmer for potatoes to the inquiry, yet it becomes clear shortly after that the two soldiers murdered the farmer and his wife. From then on the reader is aware that whatever Lacroix’s crimes, the man that stalks him is just as guilty.

Miller’s Calley shows how writers can create depth in what is a relatively straightforward set up – on paper, Lacroix and Calley are already different, but it is their reaction to the same event that really sets up their conflict.

The wolf in sheep’s clothing

Another type of villain is the wolf in sheep’s clothing. Not a friend that becomes an enemy, rather someone who starts on the side of our hero but is slowly revealed to be the main villain.

When Ed Ross enters the story of Lauren Wilkinson’s Cold War thriller American Spy, he is presented as an opportunity for Marie Mitchell, who is bored and underused in her role at an FBI field office in 80s New York. Ross offers her a chance to put her talents to good use in the employ of the CIA. Ross is different, exciting in comparison to the other men she works with. Her boss at the Bureau, Rick Gold, is described as a “squat, thick-necked man who looked like he might’ve been a high school athlete, maybe a wrestler, but had since let himself go to pot.” Ross, on the other hand, is “handsome in a corn-fed kind of way”, with a “dusting of light freckles that made him look boyish and the laugh lines…that made him seem warm.”

There is tension in the early exchanges between Ross and Mitchell, but fundamentally they are on the same side. While Mitchell doesn’t trust the CIA man, he appears to value her and want to use her abilities and talents, in direct contrast to Gold, who drowns Mitchell in paperwork and at one point stops a briefing to ask her, the only women in a room full of men, to get him a cup of coffee.

Ross recruits Mitchell, yet as she is freed from the drudgery of an FBI desk, so her perspective evolves. On her main mission, she begins to question where her loyalties lie. As she changes, so too does the role of Ross. Never fully trusting the spy, Mitchell increasingly finds herself at odds with him, until they are in direct conflict.

While the opposite can represent everything the hero stands against, the wolf was at some point the same as the hero, or at least similar. As such, when the hero eventually comes face to face with this sort of villain, they are not only confronting an enemy, but an element of themselves. In Mitchell’s case, Ross is a representation of what she thought she aspired to, a realisation that can be as traumatic as any violent act.

The other side of the coin

Building on this idea of the villain as a reflection of the hero is the other side of the coin. A villain who, on paper, is the same as the hero: the same upbringing, similar life experiences. It plays into our fascination with nurture versus nature – how does one person end up a success when someone from the same life fails?

Over the course of 21 novels (at the time of writing) and three short stories, a man like Richard Sharpe, Bernard Cornwell’s 19th-century hero, naturally attracts enemies. Yet despite spending the majority of his career fighting the French, he is generally under as much threat from his own side as he is from Napoleon’s troops.

In a society as class-driven as Georgian Britain, an upstart like Sharpe attracts enemies like moths to a flame. Yet it is not a man of higher standing and influence who hurts Sharpe most of all, but one who, like him, is from the gutter. Obadiah Hakeswill appears in just five Sharpe novels, yet his presence stalks the hero throughout the series. It is Hakeswill who is said to have first recruited Sharpe into the army, Hakeswill who conspired to have Sharpe flogged, Hakeswill who hurts Sharpe’s friends (flogging one, murdering another), Hakeswill who holds a bayonet to Sharpe’s daughter.

Sharpe and Hakeswill are very much two sides of the same coin. From similar backgrounds, they seek shelter in the army as a last resort and fight their way up the ranks. Hakeswill, as a sergeant, had realistically achieved all he could within the army’s structure, even if those means were devoid of any legal, ethical or moral notions. Sharpe is not above illegality, but he only employs such tactics when society’s rules and laws stand in the way of his innate sense of natural justice.

Sharpe, like all heroes, is nothing without his enemies. However, a litany of one-offs cannot sustain a multi-novel series. In order to break free of the ranks of also-rans, great series need great villains as much as they need great heroes. By making Hakeswill so similar to Sharpe, Cornwell gives his hero a foil who infects the series whether he is present or not.

The writer’s need for great villains

The opposite, the wolf in sheep’s clothing, and the other side of the coin are just three types of villain a writer can choose to have. Yet choose they must. Whether in a series or a standalone novel, the villain needs to be a worthy opponent of the hero. A story without an antagonist is a story without conflict, and conflict is story. Readers want to see their heroes challenged, threatened, growing and, hopefully, succeeding. None of that can happen without a powerful antagonist, no matter what form that enemy takes.

Josh Turner is a guest contributor to The History Quill. A freelance writer based in the UK, Josh is currently working on a series set in late 18th-century America.