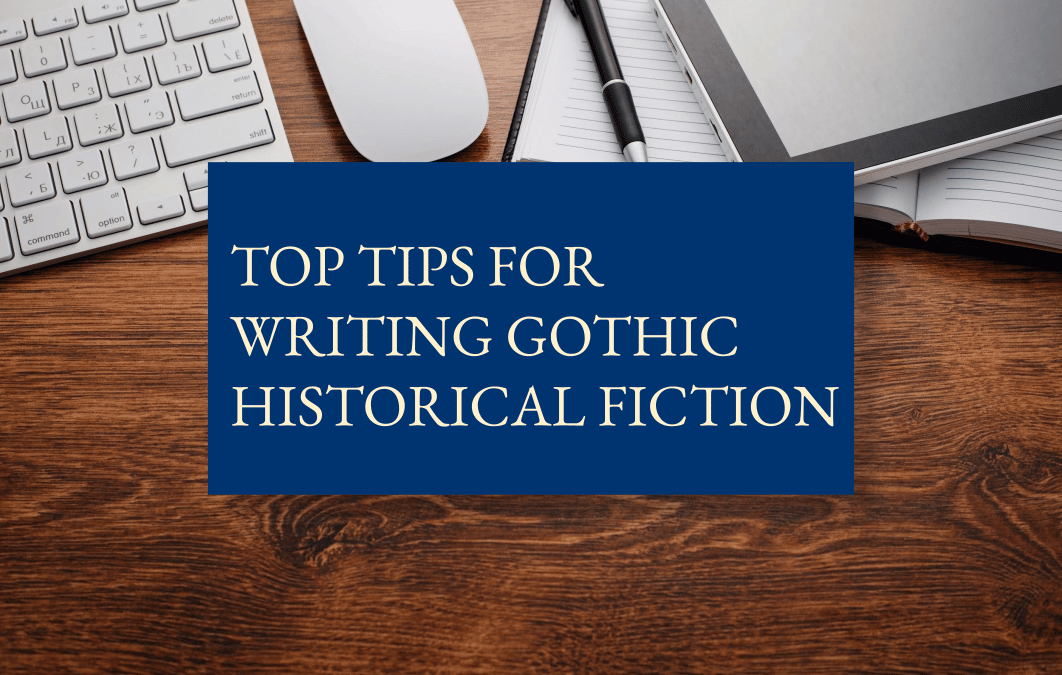 Gothic writing has chilled and inspired countless authors, and there is no reason why you can’t add a touch of the dark and brooding to your own historical fiction.

However, writing gothic historical fiction is more than just slamming a big button saying ‘Tim Burton’ on it. Let’s find out more!

As any teenager will tell you, it’s hard to be a goth on a bouncy castle. A crumbling, ivy-choked castle full of narrow passageways and dark, terrible secrets? Now we’re talking. But here’s the thing – the latter works, but the former doesn’t. Why is that?

Let’s look at the ultimate gothic setting – Castle Dracula. Dracula’s castle isn’t gothic just because – it’s gothic because it helps invoke gothic themes. Stoker uses the architecture to facilitate themes like imprisonment, claustrophobia and creeping dread. It’s away from the comfort of civilisation, and a veritable prison. Harker’s confinement wouldn’t really feel the same if Dracula locked him up in a twee little bed and breakfast in Bucharest.

Remember, when choosing your location, a strong sense of place is needed. You need to justify it to yourself. Ask yourself, ‘how is this going to help me insert gothic themes into my work?’

Old places, full of faded grandeur and isolated wilderness both help to pile on the gothic aesthetic.

If it doesn’t have gothic motifs, it’s not gothic. Simple as.

Gothic motifs are the key facets of the genre. Themes we see repeated again and again throughout the goth classics. This might sound restrictive and gatekeepery, but answer me this: Would you call it a romance novel if nobody kissed? Or a war story with no fighting?

We touched on some of the motifs above, but let me offer up something to consider. So, the German for ‘uncanny’ actually translates as ‘unhomely’. One aspect of gothic literature is to take something familiar or every day, and twist it. A doll isn’t gothic-scary, but a doll that inexplicably appears on your nightstand certainly is. Going back to Dracula, signing the contacts on some property isn’t scary, but going to Transylvania to the home of a mysterious and reclusive count absolutely is.

One of the other motifs I’d like to touch on is the presence of the supernatural. This isn’t universal in gothic writing, but it is so common it’s worthy of a mention. Now, as historical fiction writers, this is obviously tricky. Historical fiction is based in reality, and magic/monsters/things that go bump in the night aren’t real. However, that doesn’t mean your protagonist doesn’t think they are real. Let’s take the example of the doll appearing on the nightstand. If you’re writing straight-up gothic horror, there is no reason why it can’t be the ghost of a horribly murdered girl possessing the doll. However, in historical fiction (as opposed to historical fantasy), ghosts aren’t real. But your protagonist could still be driven mad by the unexplainable presence and reappearance of the doll – it turns out that the person moving it is her wicked uncle, trying to drive her into madness and despair – which ironically is even more gothic than the demon-doll-thingy.

Mystery and fear are the salt-and-pepper of gothic writing. And they go together hand in hand, complementing each other as each tantalising revelation builds up the reader’s suspense, the mystery unravels and the horrible truth moves slowly into the light.

A big part of this is deception. The initially welcoming and gregarious Count Dracula turns out to be a literal monster! However, it does work both ways. It can be very satisfying to see an apparent villain turn out to be a tragic antihero when the motives for their actions are revealed. Think Heathcliff, as a classic example of the latter.

Which historical periods lend themselves well to gothic writing?

Basically, you’re spoilt for choice! Another gothic motif – that gothic fiction is set during times of great social change or upheaval. The normal is subverted – in short, there is no comfort to be found in the conventional social order. Frankenstein famously explores the new and terrifying science of electricity, during a time when science was overtaking religion. Dracula is set near the turn of the century, as the old aristocracy of Europe clashed against the coming modern age.

History is chock-full of periods like these. Look for times of revolution and strife, or the deaths of great rulers. The chaos that follows is the perfect canvas for tales of madness, murder, and forbidden desires.

Power imbalances are another motif of gothic fiction. And again, this is where a historical setting comes into its own. Entrenched class systems, deference to one’s betters and the firm misogyny of the past helps to enforce this theme.

Castles. Think VERY hard about whether to stick your story in a castle. Yes, yes. I know they’re great. But they do scream ‘I’m throwing every trope I can at this!’. A mansion, hunting lodge, or dilapidated chateau can give you all the same gothic vibes and opportunities for awful things to happen, without going full Count Duckula on your reader.

At the risk of contradiction, you don’t need every single trope or motif to make a story gothic. Pick a few favourite ones and do them well, rather than cramming as many as you can into the story and hoping a few of them will work.

The Victorian age, or Byronesque decadence, obviously lend themselves to gothic fiction. But that’s mainly because that was when some of the classic gothic novels were written!

The trenches in WW1 could make the perfect gothic setting – isolated, the constant threat of death. Add in some mystery and you’ve got yourself a gothic tale of betrayal and woe.

Certain periods are more challenging. The Viking age tends to be more action-packed and less prone to introspection. But, hear me out: a chieftain’s hall, far away from any civilised lands. A murderer stalks the corridors at night, leaving gruesome trophies behind! Paranoia and dread fill those present, and snowed in over a brutal winter, they are picked off one by one…

See? It’s still very much a Viking story, but gothic.

Gothic is a challenging filter to put on any genre, but with historical fiction you have the whole of humanity’s past to draw upon for inspiration. The dark and twisting corridors of history make an ideal home for the gothic. This isn’t easy, but by doing so, you not only challenge yourself as a writer but also create a unique experience for your reader.

And you can sleep soundly, knowing you’ve given other people nightmares!

Jack Shannon is a guest contributor to The History Quill. He is the author of Brigandine – a dark, bloody fantasy where unfortunately for Ulf (and everyone else), magic is returning to the land of Ashenfell. It has quite a few sword fights and a healthy dose of Lovecraft. Why not give him a follow on Twitter? @Jack_Shannon