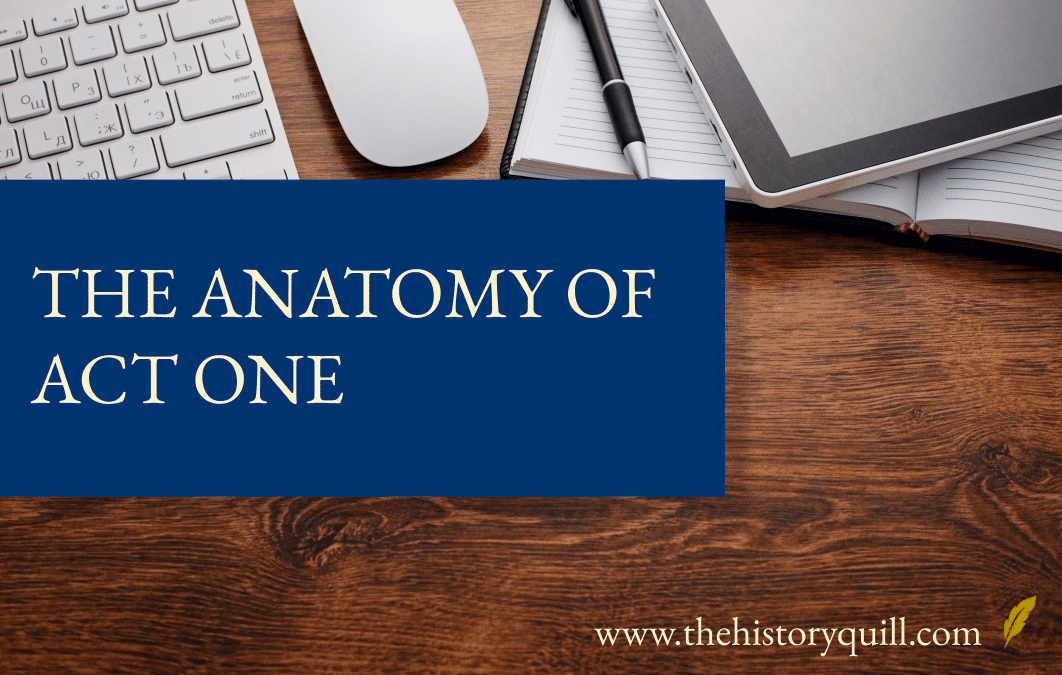 Creating a good plot structure is an important step in writing your historical novel. And within that structure, act one is critical. It’s your chance to pull your reader into your story and show them why it’s worth investing their time. In it, you have to 1) persuade them of the quality of your writing, 2) pique their interest in your story world and characters, and 3) show them what your story’s about and where it’s taking them.

Act one is the beginning of your novel, but it’s much more than just an introduction. There are numerous elements that go into it. You may have heard of some of them – the hook, the inciting incident, the call to adventure, the first plot point. In this post, my aim is to help you make sense of them and how they fit together.

I’ve used some multi-genre examples from literature and film (The Serpent Sword, Pride and Prejudice, The Hunger Games, Game of Thrones, and The Patriot) to illustrate some of the elements, so this is your official spoiler warning!

You can also get a handy diagram to help you visualise it all, complete with a summary of the key parts.

DIAGRAM OF ACT ONE

The first element of act one is the hook – your opening pitch to the reader. It’s your chance to show them the quality of your writing and immediately grab their interest. It can come in the form of a prologue or it can be your first chapter, but it should always be the very first part of your novel.

There are a variety of ways to create an effective hook. You can hint intriguingly at some of the questions and mysteries in the wider story, use intense action or drama to make the reader wonder what’s going to happen next, set it in an earlier time period that later connects to the main plot, or even start in medias res (before switching back to the beginning in the next chapter) to provide a tantalising glimpse of what’s to come.

Matthew Harffy’s The Serpent Sword begins with the murder of Octa, the protagonist’s brother. The reader doesn’t know who murdered him or what the consequences might be, immediately creating a sense of mystery that makes them want to read on.

Your hook doesn’t have to feature your protagonist, although it’s fine if it does. Sometimes – especially if the hook is set in an earlier time period – it can feature characters who don’t make another appearance in your novel at all. But whatever happens in the hook should normally have some consequences for your story further down the line.

If your hook was successful, most of the people who picked up your book will make it to chapter two. They’ve now made a tentative investment in your novel and they want to know more, so it’s time to introduce them to your story world and your characters.

Normally, the first two or three chapters (or more) following the hook will show the status quo of your story world. Here, you need to encourage your reader to invest in your characters and immerse them into your setting. You need to 1) introduce most, if not all, of your main characters, 2) reveal the main characters’ goals and motivations, and 3) show the details of your setting.

It’s often a good idea to present your protagonist as someone who’s not entirely satisfied with the status quo. Perhaps there’s something they want to change, but circumstances or their own fears are preventing them. Then, when the story really gets going, it’ll be an opportunity for them to achieve their goals and become the person they want to be.

The inciting incident is the true beginning of your story, and it should normally take place in the first half of act one once you’ve finished introducing the characters and setting.

By the time you’re finished with the introductions, your reader might be starting to wonder where the story is taking them. The inciting incident answers that question. It’s the spark that lights the fuse of your story. It shakes up your story world and your main characters’ lives, and it pulls your reader in by making them wonder how the characters are going to react and what the consequences will be.

The inciting incident can take many forms, so let’s illustrate with some examples:

In Pride and Prejudice, the inciting incident is the arrival of Mr Bingley and his friend Mr Darcy. This shakes up the Bennett family by providing prospects for marriage.

In Game of Thrones, the inciting incident is a warning to the Starks in a letter from Lysa Arryn that the Lannisters murdered the Hand of the King. This accusation sets the two great houses against one another and eventually leads to the War of the Five Kings.

The call to adventure

The call to adventure often comes at the same time as the inciting incident, or at least very soon afterwards. It’s the call upon the protagonist to get involved in the story – to react to the inciting incident and try and shape the events that are unfolding before them.

Sometimes, the protagonist will resist the call to adventure. There might be something keeping them from getting involved in the story – something tying them down, either externally or internally. They might also make a half-hearted effort to answer it, only to fail shortly afterwards. This adds some extra suspense and makes their journey feel more authentic.

In The Patriot, Benjamin Martin receives the call to adventure at the outbreak of the Revolutionary War, but, fearing for his family’s safety, he uses his influence to try to avoid conflict rather than get involved in it. It’s only when one of his sons is killed during a British raid on his home that he finally answers the call and joins the fight.

So where does the story question come into all of this? For those who are unfamiliar, the story question is just that – a question within your story. It’s the fundamental question that your reader wants to know the answer to as they turn the page. It’s also the question that gets answered in your resolution. It’s vital to have one in your story because it gives it a purpose – a reason for your reader to want to get to the end.

Going back to The Serpent Sword, the main story question is whether Beobrand, the protagonist, can discover who murdered his brother and bring them to justice. It’s introduced in the first two chapters when Beobrand realises his brother has been killed and vows to avenge him.

The first plot point marks the end of act one and the transition to act two. It’s usually a major escalation of the plot or a setback of some kind, and it forces the protagonist to commit to the story if they had hitherto been resisting the call to adventure. It should occur roughly a quarter of the way through your whole novel – right at the end of act one – though it can sometimes come a little later if there’s a good reason for extending your first act.

The first plot point plays an important role because, by the time the reader gets to this point in your novel, they’ll have a good understanding of what it’s about and what the protagonist needs to do to answer the story question and achieve their goals. You’ve got to avoid the story becoming too predictable and stop your reader from getting too comfortable. In other words, things need to start going wrong – or at least escalating. You might also want to raise the stakes of the story, introducing a reason why the story question matters even more than the reader previously thought.

Going back to The Patriot, the first plot point is the British raid that causes Benjamin Martin to join the fight. It makes him realise that avoiding violence won’t keep his family safe, and he also becomes motivated by revenge. The death of his son raises the stakes – now it’s personal.

As a whole, act one should usually take up about a quarter of your story. But, if there’s a good reason, it can be a little shorter or longer. The same goes for the other elements – there’s no exact science as to where they should be located, so, in the diagram that you can get below, you’ll see act one is divided up into zones.

Do you have to follow all these rules and include all these elements? What happened to just telling a story? I hear you. The answer is no, of course you don’t. If your story works without some of them, that’s fine. But think about why they’re so common – they help to modulate a story’s flow in a way that maximises reader engagement. If you don’t want to work with them, think about how else your structure will engage your reader.

DIAGRAM OF ACT ONE