Narrative distance: what it is and how to control it 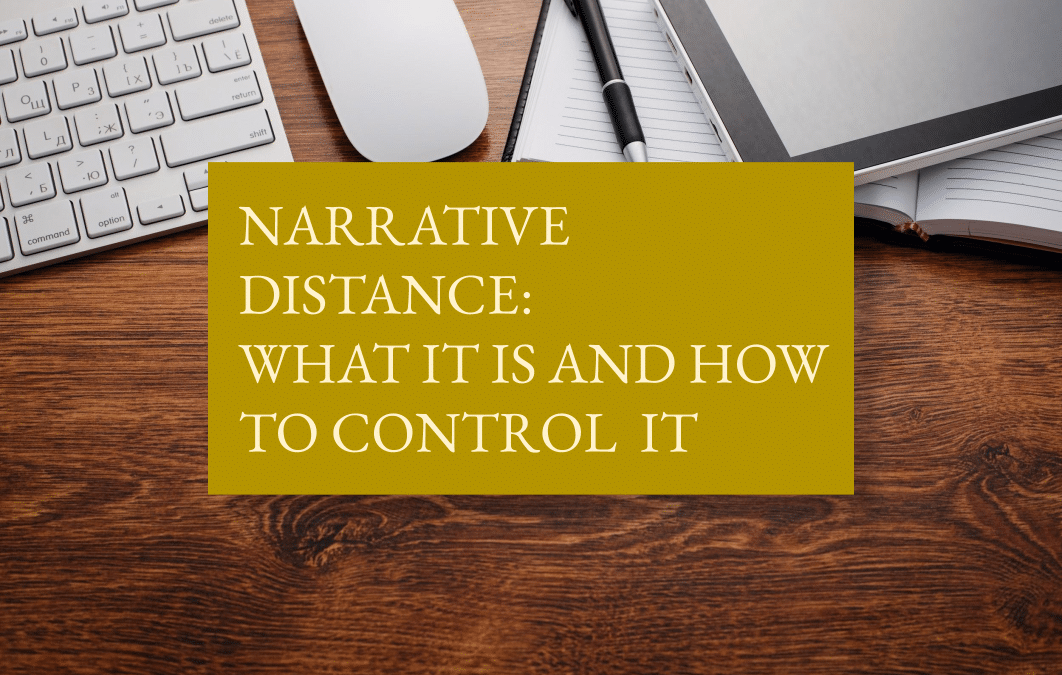 Whether your story is plot-driven, character-driven or somewhere between the two, there will be times when it’s desirable to draw your reader deep inside a character’s consciousness, and others when it’s better to pull back for a broader and more objective view of events. This perceived distance between the reader and the characters and events of your story is called narrative distance. By understanding what it is and how to control it, you can both broaden and deepen the world of your story, along with your reader’s emotional connection to it.

When narrative distance is at its greatest, the story is in a distant narration mode. As readers, we’re watching from afar, surveying characters and events with an objective and impersonal eye – think of it as the equivalent of a wide shot in a movie.

Then, as the distance narrows slightly, a character comes into view. At this stage, all we can know about the character is what we can intuit from external clues (like physical appearance, expressions, dialogue and actions). As the narrative distance shrinks further, we begin to get glimpses of the character’s subjective experience (their thoughts and feelings).

As the narrative distance is reduced even further, we enter close character mode. The reader is inhabiting the character’s consciousness: seeing through their eyes, thinking their thoughts, feeling what they feel in real time.

We’re in distant narration mode here; the narrator is providing context in an objective and impersonal way. This works well for setting the scene, but if we were to stay at this level of detachment for the rest of the story, we’d have a hard time connecting with characters and events.

2. Henry J. Warburton had never much cared for snowstorms.

The narrator now imparts a couple of details about the character – an objective fact (his name) and an insight into his subjective experience (he never much cared for snowstorms) – which draws us a step closer to the character and events.

We’re now on first name terms with the character. We have a clearer sense of his subjective experience – not only does he not care for snowstorms, but he hates them. The effect is more personal and informal than the previous example, drawing us closer still.

4. God how he hated these damn snowstorms.

5. Snow. Under your collar, down inside your shoes, freezing and plugging up your miserable soul…

We’re in close character mode now. We’re inside the character’s head, experiencing his thoughts and feelings in a stream of consciousness. The result is intimate and direct, but if the narrative distance were to stay at this level, the reader might be left feeling puzzled over the lack of broader context.

The last thing any writer wants is to disorientate their reader and jolt them out of the story. For that reason, shifts in narrative distance need to be carefully controlled. A smooth transition from one end of the scale to the other will take your reader seamlessly from distant narration to close character mode.

Take a look at this example from Kate Morton’s The Secret Keeper to see a smooth transition in action:

“A clutch of hens appears from nowhere to peck between the bricks of the garden patch, a jay drags his shadow across the garden, a tractor in the nearby meadow putters to life. And high above it all, lying on her back on the floor of a wooden tree house, a girl of sixteen pushes the lemon Spangle she’s been sucking hard against the roof of her mouth and sighs.

It was cruel, she supposed, just to let them keep hunting for her, but with the heatwave and the secret she was nursing, the effort of games – childish games at that – was just too much to muster. Besides, it was all part of the challenge and, as Daddy was always saying, fair was fair and they’d never learn if they didn’t try.”

In paragraph one, the only details we know about the character are those that can be externally observed – a girl of sixteen, lying on the floor of a tree house in a garden, sucking on a sweet and sighing. Then, at the start of paragraph two, the narrative distance narrows and we’re offered a glimpse into the girl’s thoughts. By the last sentence, we’re inside the girl’s head, accessing her thoughts in real time (and in her own voice, e.g. “Daddy”).

Here’s another example, this time from Ambrose Parry’s The Way of All Flesh. Notice how we begin roughly in the middle of the narrative distance scale, then the character’s voice takes over.

“Raven wondered if the same individual witnessed Evie’s throes and left it behind in his hurry to escape the aftermath. If so, why didn’t he call for help? Possibly because to some, being found with a sick hoor was no better than being found with a dead one, so why draw attention to yourself? That was Edinburgh for you: public decorum and private sin, city of a thousand secret selves.

Aye. Sometimes they didn’t even need to spill their seed for the vessel to be transformed.”

— Ambrose Parry, The Way of All Flesh, Canongate Books, p.3.

Which narrative distance to choose?

The key is to keep your reader front of mind and ask yourself: “What effect am I aiming to achieve at this moment in the scene/story?”

If your aim is to set the scene or portray a broad sweep of events in a matter-of-fact way, a wide narrative distance is likely to be best. This end of the scale is particularly useful for establishing shifts in space, time and viewpoint, or if you want to want to pull back to give your reader some breathing space to process a key development.

If, on the other hand, your aim is to create an emotional connection between reader and character, or to make a pivotal scene feel more visceral and vivid, a narrow narrative distance may be best.