Is your story idea viable? 7 tips to help you decide 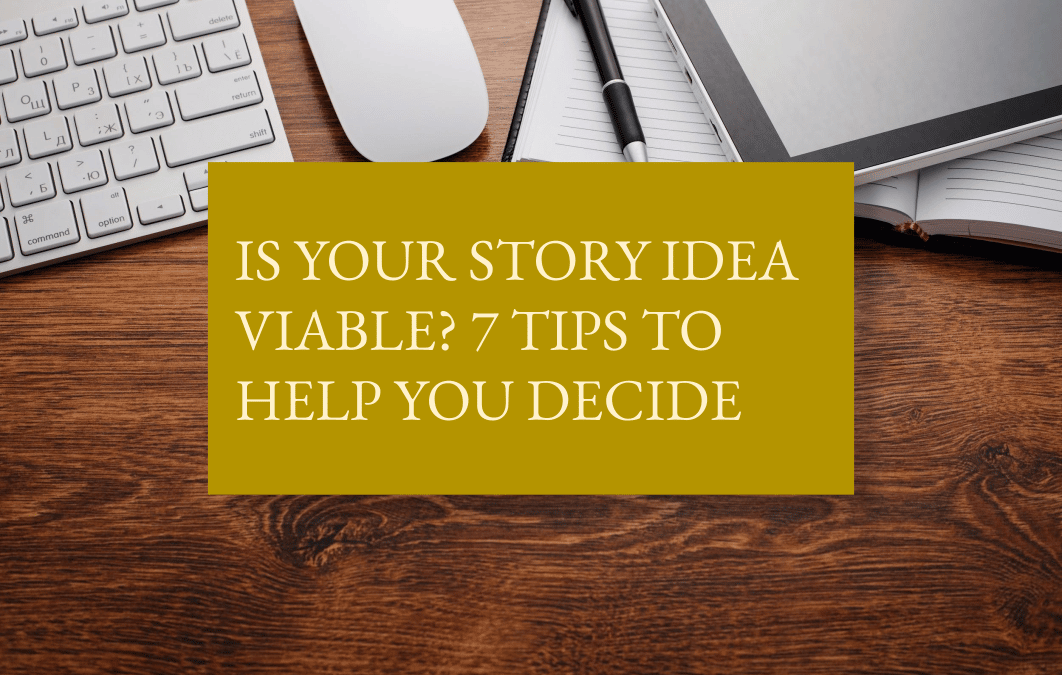 Inspiration for a novel can come from anywhere, and it’s always exciting when an idea strikes. But how do you know if an idea is viable? What does viable even mean?

Essentially, an idea is viable if it’s strong enough to carry a whole novel, from the first page to the last.

But how do we know if the spark of inspiration is strong enough? How can we be sure there is sufficient ‘fire’ in the initial idea to fuel an entire novel, so your story doesn’t fizzle out 40,000 words into a draft? The following 7 tips will help you decide.

1. Does the idea excite you?

Do you find yourself thinking about your story idea at odd moments? Does it make you want to start writing straight away? Can you imagine yourself immersed in your story for potentially a year or more? It might take less time to write, of course, but more likely than not it will take longer than you think. To write a novel involves exercising many different skills, including perseverance and endurance. If you have enthusiasm for your idea, at least in the beginning, this will help sustain momentum.

2. Can you describe the idea in a single sentence?

This might seem an impossible task at such an early stage of the novel writing process, but all you need at this point is a distinct main character, and a brief story set-up. If this proves tricky, then the idea itself isn’t clear enough, and this will cause issues as you begin writing a first draft. When thinking about your main character, you don’t need lots of details, just a basic idea of who they are, for example: Betty, a 100-year-old-woman who lives in Surrey.

When considering the set-up, think about something that will turn your main character’s world upside down, such as actions or events that will divert them from the path they were on, or perhaps an incident that forces them to make a change in their life. The character and set-up will be what your readers will be invested in, and so you need these to be strong enough to keep their interest. One way to approach this is to ask, “What if?” For example: what if Betty, a 100-year-old woman who lives in Surrey, wants to become the oldest person in Britain to win a lucrative prize, and what if the only way she can do this is by bumping off her elderly rivals…?

By asking a similar ‘What if’ question of your idea, you will quickly find out if the story has potential.

3. Can you develop that sentence into a fuller premise?

A premise expresses the main plot in simple terms, communicating your story’s essence in just a couple of sentences. The premise must have direction and should clearly express where the story starts, where the story is going, and most importantly its purpose. Think of your main character’s goals. What motivates them? What do they ultimately want? For example: Betty wants to win the lucrative prize. Why? Because she needs to pay off her son’s gambling debts. What are the stakes? If she doesn’t win the money, and doesn’t pay off her son’s debts in time, her son will be killed by the gangsters he owes money to. The consequences are serious if Betty doesn’t manage to win the prize in time. Ultimately, you need to know what your main character wants, why they want it, and what the stakes are.

4. Can you develop that premise into a plot?

This doesn’t mean you have to write a detailed chapter breakdown. You could simply bullet point the key events and turning points in your story, so that you can see how your character’s journey through the novel progresses. So, for example, introduce your main character and state what’s normal for them – Betty is 100 years old and lives in Surrey with her son. Then state the set-up (including the inciting incident that turns your character’s life upside down) – Betty’s son has huge gambling debts, that Betty hopes she can pay off, if she can win a lucrative prize by becoming the oldest person in Britain. Then introduce the conflict – to become the oldest person in Britain, Betty needs to kill her older rivals, using skills she learned as a Special Agent in the Second World War. She mustn’t get caught! If she fails, her son will be killed by the gangsters he owes money to.

5. Is there enough conflict to sustain a novel?

Throw as many problems and as much conflict as you can at your character – conflict that is connected to the main premise, rather than happening just for the sake of it. What’s getting in your character’s way? The more difficulties your character faces, the better. You can always edit the conflict down in a later draft.

6. Is the main character compelling – and does their journey matter?

Is your main character interesting, can we connect with them on a human level? Are their wants and needs intriguing? How will they change by the end of the story? Will the reader care enough about what they’re going through to follow them through 90,000 words? Does their journey speak to universal themes that will resonate with the reader? Are the stakes high enough for us to care?

7. Is your idea unique, or at least unique enough?

This is where reading comes to the fore. Do your research. Read other books in your genre, google your plot idea and see what it throws back. Describe your book idea to friends and family and see what their reaction is. If they express excitement too, and haven’t come across your idea before in a book or play or film, then this is a good indication that you may have a unique enough idea. Of course, there are only a finite number of plots in the story universe, but it’s how you set your story apart that matters.

Once you have taken your novel idea through these seven stages, you will hopefully end up with something that is unique, exciting and most importantly, viable.

Louise Morrish is a guest contributor to The History Quill. Her debut novel, Operation Moonlight, won the Penguin Random House First Novel Competition and was published by Century in July 2022. A dual-timeline novel set in 1944 and the present, it tells the story of Betty, a 100-year-old woman hiding a dark secret from the war, when she worked as a secret agent for the Special Operations Executive. Find out more about Louise via her website, louisemorrish.com, or Twitter, @LouiseMorrish1.