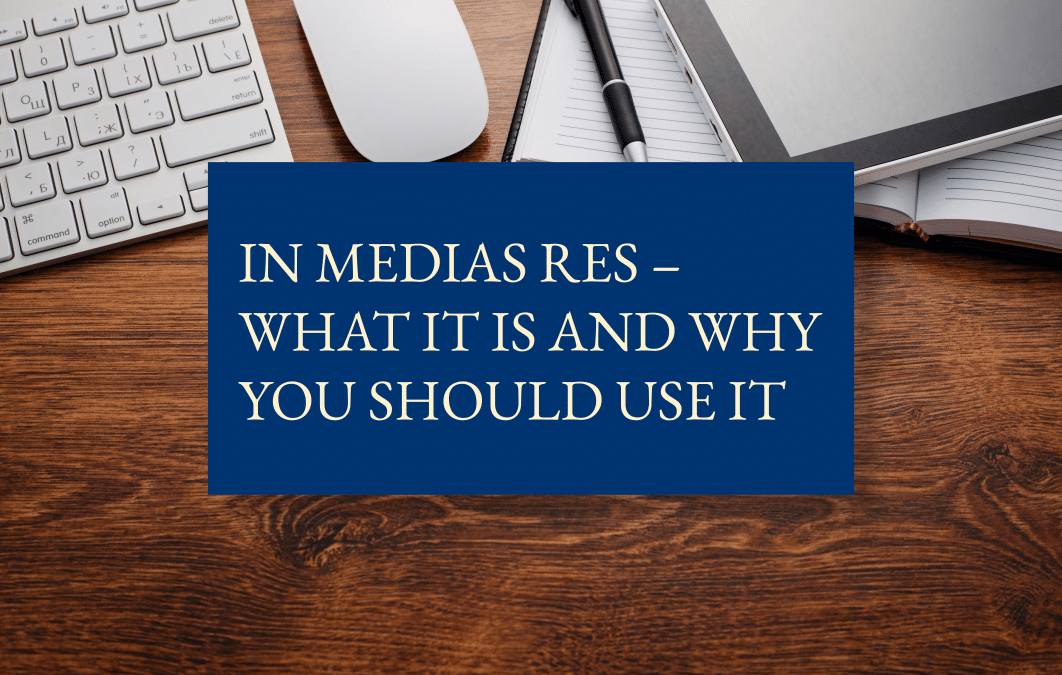 If Homer and Virgil sat down to watch The Sound of Music, they might take umbrage with a certain singing nun. Apologies Maria, but the beginning is not always a very good place to start.

In medias res is the literary technique of jumping straight to the heart of the action, literally ‘in the middle of things’. What exactly those things are is the author’s prerogative. The common misconception is that in medias res means opening with an action scene, but in reality, the technique is a far broader church. In fact, if that action scene is incidental to the story, or points to no hidden past that the author intends to flesh out, it is not really in media res at all. Distinctively, in medias res means starting at the apex or nadir of a particular character’s journey and backfilling information from there, making use of an unknown past and an unknown future. It is often used in the initial pages of a novel to launch us into the action and create immediate urgency.

An ancient technique with modern resonance


The device is how Homer and Virgil (and not The Sound of Music) start their epics. In the Iliad, we begin with the quarrel of Atreus and Achilles. In the Odyssey, we open not where the Iliad ended, at the walls of Troy, but rather in the middle of Odysseus’ wanderings, with our hero held captive by Calypso. Virgil, repurposing Homer’s epic for the Roman world, borrows the technique, describing the storm that strands Aeneas on the shores of Carthage where he meets Queen Dido, who, in turn, invites him to tell the story of the fall of Troy. Only then does Virgil take the chance to recount it to the audience.

Though we may not notice it, this ancient practice is widespread in modern storytelling. Some examples are more pronounced than others. The English Patient unravels slowly, dancing back and forth between 1944 and its characters’ youths. In One Hundred Years of Solitude, Gabriel García Márquez condenses a century of melancholic beauty into its opening line: ‘Many years later, as he faced the firing squad, Colonel Aureliano Buendía was to remember that distant afternoon when his father took him to discover ice.’ At another end of the spectrum, Twilight attempts a more prosaic version in its prologue: ‘I’d never given much thought as to how I would die … but even if I had, I would not have imagined it like this.’

Even those novels that don’t explicitly move around a chronology chapter by chapter often play with time within paragraphs. In The Pillars of the Earth, a story mostly told chronologically, we begin with the line: ‘The small boys came early to the hanging.’ Only after that do we learn who is being hanged. Only much later do we learn why.

Nor is it just the novel that has adopted this form. In television, several episodes of The West Wing plunge us into a situation, and then rewind to explain how we got there. If Star Wars began with the life story of Darth Vader, and not as it does with the Death Star plans stolen, there would be no space for an ‘I am your father’ type revelation. Beginning in medias res forces us to form conclusions about characters with incomplete information, thereby creating fertile ground for authors to subvert and confound expectations later.

Why use in medias res?

When done well, the technique can create high-stakes tension and a powerful sense of immersion and curiosity, buying an author time and goodwill to provide slower exposition. This is especially important if you know that the story would otherwise start relatively slowly. If so, opening in medias res with a dramatic chapter before rewinding to a more natural starting point can be a powerful way of promising the reader that there is plenty of excitement to come. In this way, the reader is not only compelled to delve into the character exposition that follows, but also concludes that the rest of the novel must be exciting if they’ve given away ‘the good bit’ early on.

In the context of historical fiction specifically, the approach can also work effectively when readers know the final fate of a character or event but may be less familiar with exactly how it reached that point. In this scenario, starting in medias res shifts the pivot of the story, giving weight to plot twists that could otherwise be lost in the progression of a familiar tale.

It is a device that can also be used effectively to move between different sections of a book without relinquishing control of pace. In Ian McEwan’s Atonement for example, part three begins, ‘The unease was not confined to the hospital.’ Quite what hospital or what unease that might be is unclear. A new perspective hooks us just as the old one let us go.

Another reason that many authors enjoy using in medias res is the freedom that it offers to deploy a range of supporting techniques. Dreams, flashbacks, magic and visions all offer themselves to writers looking to conjure a hidden past. Another option is to use palimpsests, a technique whereby we visit a location or building in the present before learning of its very different past. If you were writing a novel about the fall of Constantinople for example, transporting the reader to the Hagia Sophia in its guises as both a mosque and a cathedral could be a powerful way to bind two different timelines, or highlight the momentous impact of the story you are about to tell.

The dangers of in medias res

Using in medias res well is demanding. There is a thin line between dangling enough unknowns to entice a reader and failing to explain critical background and decision-making. The latter makes it hard to empathise with the characters involved in a scene, creating a tone that is at best jarring, and at worst confusing, generic and uninteresting.

To avoid this, consider Jane Eyre, a novel more famous for its last line (‘Reader, I married him’) than its first, the impactful but innocuous ‘There was no possibility of taking a walk that day.’ Immediately, as a reader we have questions. What day is it? Why shouldn’t the protagonist take a walk? Who even is Jane Eyre anyway? Charlotte Brontë did not need shadowy figures, rising heartbeats, heavy breathing and other chase scene tropes to create a compelling in medias res opening.

Because of these complexities, it is often easier for authors to craft a compelling introduction later in the writing process rather than get bogged down by trying to create the perfect first chapter immediately. This provides time to flesh out the story and identify exactly which point of the timeline represents the crux of the narrative.
If you want to immerse readers into your world and are comfortable controlling the pace to fill in the gaps, it is well worth considering whether the middle might in fact be the perfect place to start.

Edward Willis is a freelance writer, editor, and pitch coach, working with a range of publications and private clients. He is also an avid reader of historical fiction, and is currently writing the first draft of a novel set in 15th-century France. You can find out more at edwardwgwillis.com, or follow him on Twitter at @ewgw28.