How to hook your reader in chapter one 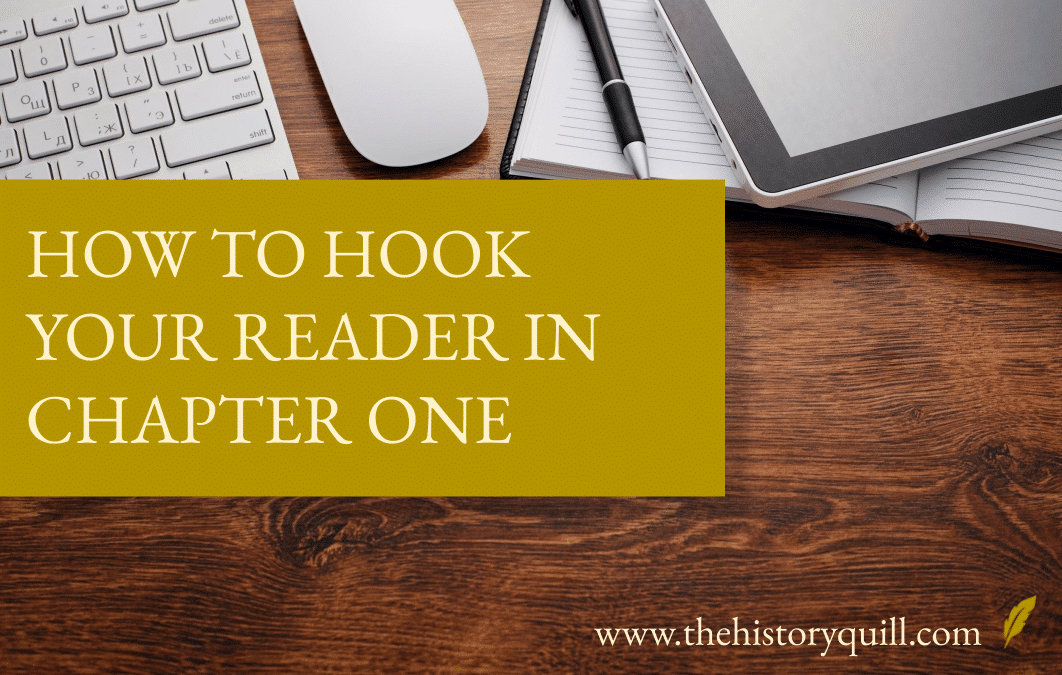 The first chapter of your novel – or your prologue if you prefer – must contain a compelling opening hook, giving the reader a taste of what’s to come and persuading them that the rest of your story isn’t to be missed. Get it right and your reader will commit to your story; get it wrong and they might put the book down before they even get to chapter two.

It’s not surprising, then, that writing your opening hook can feel like a lot of pressure. To take some of the weight off, I’ve put together this blog post offering some top tips on how to do it.

What’s going to happen next?

The way to make your opening hook immediately compelling is the same way you make any other piece of writing compelling – you make the reader wonder what’s going to happen next.

This means the events of your opening chapter need to be sufficiently dynamic or intriguing. For example, a murder mystery might open with the murder scene itself, shown from the victim’s point-of-view. As the (unknown) killer hunts, traps, and finally kills the victim, the reader will be gripped from start to finish, initially wanting to find out how the murder unfolds, then wanting to know who killed the victim and why, which leads them into the next chapter and the wider story.

A romance novel might open with a visit from the protagonist’s betrothed, who quickly announces that their engagement is at an end. The reader will immediately want to know why and see how the protagonist reacts. As the protagonist is left reeling, the chapter might end with them asking themselves how they will recover from the shame and whether they will ever be happy, which piques the reader’s interest for the subsequent chapters.

Whatever your genre, the key is to leave your reader with unanswered questions and make them wonder what’s coming next.

Your opening hook ideally needs to situate the story in the genre the reader is expecting. If the opening chapter to your action/adventure story focuses on the protagonist’s love life, your reader may question whether this is the kind of story they want to read. If it opens with a battle, they’ll feel more confident that your story is for them.

There are exceptions, of course. Sometimes, the events of the opening hook have such important ramifications or raise such compelling questions for your wider story that it’s permissible for them to be slightly out of kilter with your genre. An example might be an inheritance drama that starts off with a battle scene in which the heir to the family fortune dies. The death sets off a chain of events that’s so key to the plot of the story, and so compelling in nature, that it might be worthwhile depicting it.

Connecting the hook to the wider story

No matter what happens, the hook must connect to the wider story, and the connection should be consequential rather than incidental. That means it’s not enough to start your action/adventure novel with a random battle scene that has no consequences for your main characters or your plot. Though a battle will have some inherent appeal to action fans, it will feel offputtingly dislocated and futile if it doesn’t actually matter in terms of the wider plot.

The connection might not be obvious at first, of course. Your opening hook could have implications for your story that only become clear later on, and that’s fine. Just make sure you make the connection before the end, otherwise the reader will feel like they’ve missed something.

Opening hooks are sometimes set years before the events of the main story. You might find it useful to adopt this approach if you want to show the beginnings of a mystery or conflict that will prove central to the story but originates long before. It’s also fairly common for an opening hook to be told from the point-of-view of a character who doesn’t feature prominently in the rest of the story, but whose perspective provides tantalising clues and insights that grab the reader’s interest. Such openings often take the form of a prologue rather than chapter one to reflect the incongruity in time or perspective.

Another particularly effective technique is to set your hook in medias res, meaning it portrays events that take place later on in your story, before you switch back to the beginning for your next chapter. For example, a thriller could begin with a chapter in which the protagonist is captured and desperately tries to escape before their impending execution. When the next chapter opens six months earlier, the reader will be hooked as they’ll wonder how the protagonist they’re now seeing at an earlier point winds up in such a precarious situation.

Setting your opening hook in medias res works very well if the beginning of your story is otherwise quite slow and there aren’t many immediate opportunities for an exciting, intriguing hook. It does come at a price, though, because it initially makes the true beginning of the story feel more like a flashback, which isn’t as compelling as the ‘present’. As the reader adjusts to the main timeline, this effect will wear off.