Head-hopping: what it is and why you shouldn’t do it 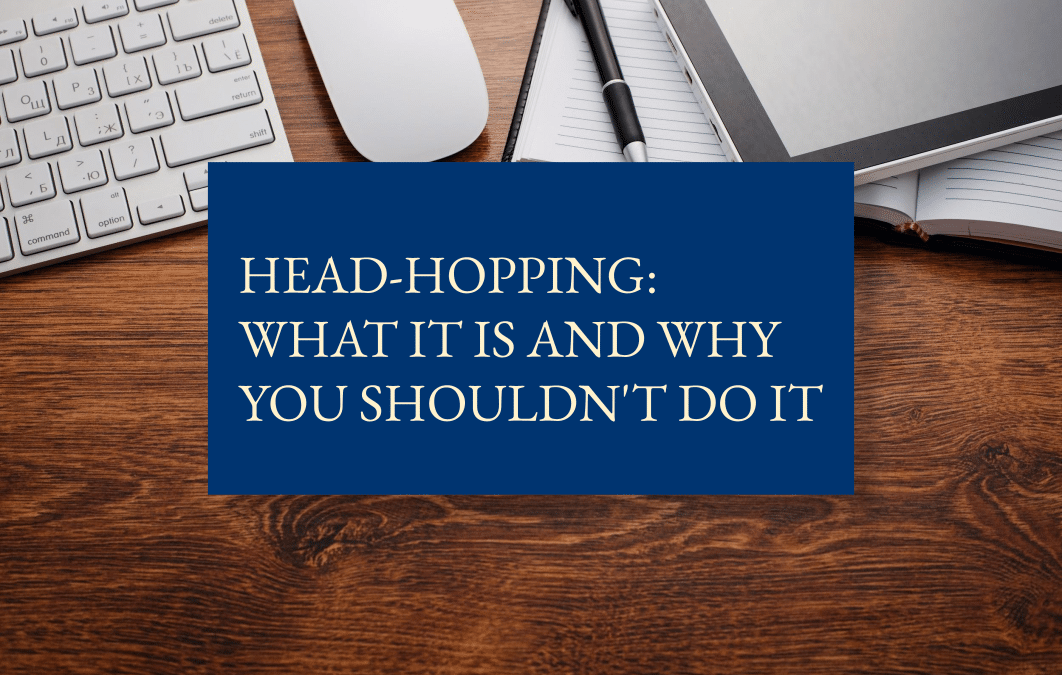 What is head-hopping? It’s when the point of view (POV) character switches abruptly in the middle of a scene. Take a look at this excerpt:

‘Something wrong with the food, Miss Annalise?’ Elias asked. Why was she acting all prim even when no one else was around, like they hadn’t spent last night dancing waltzes under the full moon? Like he was nothing more than a kitchen boy to her again.

‘Not at all,’ she replied. Do not look at him, she told herself. It would be no use explaining that her father saw them almost kiss last night and what that would mean. Elias had never experienced a real family, would not understand that just because she and her father were close, it did not mean she could get away with whatever she wanted. Servants were not husband material. ‘But I would like a bit of peace before Father comes downstairs, if that’s all right.’

Elias flinched. Same pernickety tone, same look down her nose at him. Why had he ever told himself she was different?

He used his cheeriest serving voice as he backed through the kitchen door, hands full of last night’s dishes. She felt her heart breaking. ‘More than all right. It’s all I have to give you.’

Did you feel like you were trying to keep up with two different scenes at the same time? Head-hopping often has that effect. At first, we’re in Elias’s POV, which focuses on his hurt as he concludes that Annalise still thinks of him as a lowly servant despite a fun night together. Then, after Annalise speaks, we suddenly hop to her head. There, we learn a very different version of the story, told in her (more formal) voice. Just as abruptly, we return to Elias’s POV, with one dangling sentence in Annalise’s (She felt her heart breaking). Sometimes, it’s not even clear whose POV we’re in – who thinks that Elias’s voice is cheery? Is it him or Annalise?

Head-hopping is usually a tell-tale sign of an unpolished fiction writer. But why is it such a problem? Here are a few reasons.

1. Head-hopping disorients readers, preventing their immersion in the story

Fiction relies on readers’ deep immersion in the story. Every time they have to stop and puzzle out the POV, they step out of the story and into an unpleasant confusion. However brief, those moments add up, until reading feels more like a chore than a joy. This is the opposite of what an author wants.

Depending on how many heads the author hops among and how well told the story overall, the reader might never deduce whose thoughts are whose. That’s bound to create a frustrating reading experience.

2. Head-hopping compromises the emotional coherence of a scene

Even in the same scene, each character has a different emotional viewpoint. This means that a change of POV character is a change of emotional world. Take the Elias and Annalise example. In Elias’s POV, the emotional tone is one of hurt hardening to anger, while in Annalise’s POV, it’s one of regret. Elias makes himself vulnerable; Annalise hides. If we force readers to process both of these emotional developments at the same time, guess which one they actually feel? Neither.

Think of POV as a spotlight on a particular character. When an author head-hops, the POV character doesn’t get their chance to shine. In the excerpt above, we miss a valuable chance to empathise with Elias. Before we can settle into his hurt and disappointment, Annalise barges in and starts telling her story.

Now, we’re disconnected from Elias. Our attention split between him and Annalise, and his side of the story is invalidated as a misunderstanding. This is just as bad for the intruding character (in this case, Annalise). She’s now perceived more as a source of confusion than as a character in her own right.

If you find yourself head-hopping often in your writing, there may be a reason you feel the need to switch among different POVs. Do you know whose story you really want to tell in your scene? An attempt to tell everyone’s story usually becomes no one’s story.

If you have more than one POV character in your story, consider which character has the most to lose or undergoes the biggest change in the scene. Chances are, the scene will be much more powerful if you write it from that character’s POV alone, homing in on their emotional experience in the moment.

5. Head-hopping comes across as clumsy

If only subconsciously, readers perceive head-hopping as a lazy way to convey what a character thinks or feels. They know that there are more sophisticated and interesting ways to do this. The more they see it, the less they’ll feel they’re in the hands of a skilled storyteller.

Some writers might ask, ‘But how else am I supposed to let the reader know how the other characters are reacting?’ If that’s you, read a full scene from published novel. Observe how other authors achieve this without ever stepping out of the POV character’s head. Notice especially how they use subtext in dialogue and action to convey character thoughts and feelings.

Alternatively, they might save a big reaction from another character for another scene, where that character can smoothly take over the POV. This option would be the ideal solution for the Elias and Annalise excerpt above. Instead of Elias’s and Annalise’s stories and voices being shoved into the same scene, each character would get their own space.

But what about the omniscient POV?

The main thing to understand is that even the omniscient POV presents the story from the perspective of a single character: the narrator. The narrator has a distinct voice. Even when it dips into the thoughts of a particular character and colours those thoughts with that character’s voice, it’s clear that this is not the narrator’s voice. In such instances, we haven’t abruptly switched from one POV to another and back again, as in the Elias and Annalise excerpt. We’re still anchored in the narrator’s POV.

The difference also comes down to the skill of the author. An omniscient POV narrator’s switching from one character to the next is strategic. All the POVs that it presents fit together in a way that supports the scene as a whole. Head-hopping has no such artfulness. It feeds the reader pages of one POV, only to plonk down a few sentences in the POV(s) of one or many other characters.

If you’d like to write an omniscient POV and aren’t sure when you might be head-hopping, ask your editor or beta readers to point out when a POV shift feels ‘off’.

There’s a reason we almost never see head-hopping in today’s successful novels. In most cases, it’s a crutch for the writer rather than a creative choice that will enhance the reader’s experience. To break the head-hopping habit, try thinking of conveying non-POV characters’ inner states through actions and words as a challenge. It will help make you a better and more nuanced writer. All creativity thrives on limits, and POV is no exception.

Kahina Necaise is a content editor for The History Quill. She is also the executive editor of its sister brand for writers of fantasy and science fiction, Fabled Planet. When not editing, she can usually be found writing her own fantasy fiction with ancient-history-inspired settings, reading, or going on walks while daydreaming about one of these things.