Going to the toilet in historical fiction 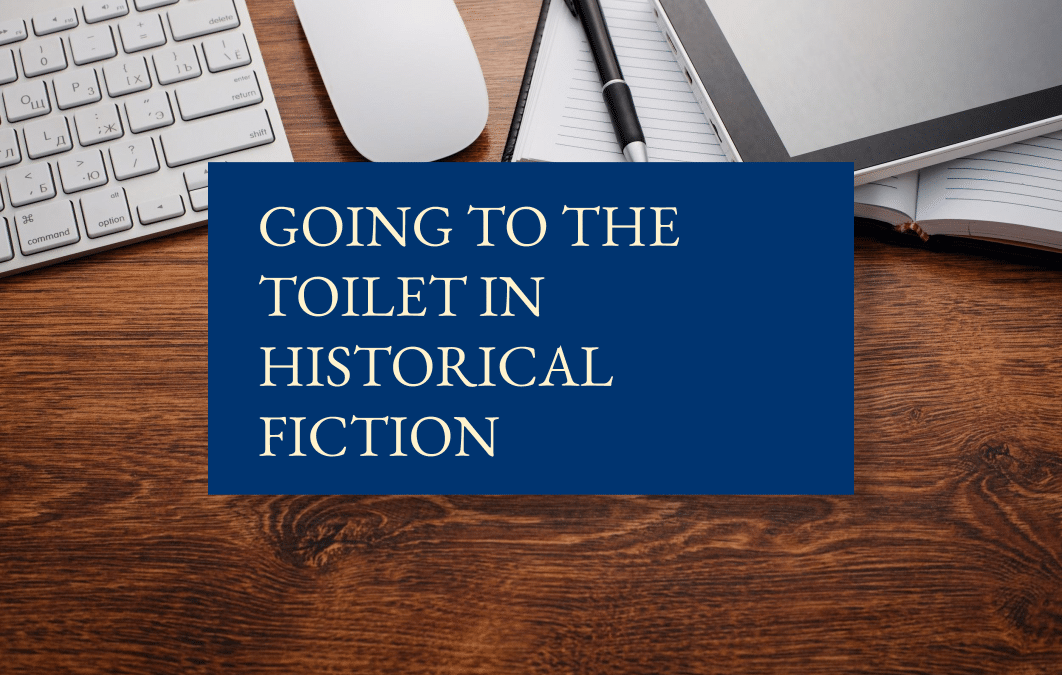 Why does no one go to the toilet in historical fiction?

Well, of course they do, but we don’t mention it. Writers are happy to offer detailed descriptions of wine, tea, and coffee consumed, water scooped from streams, juice squeezed from fresh oranges, et cetera, but we are, on the whole, rather coy about how our poor characters might deposit all of that liquid. And heaven forbid that any of them might need to … er … pass anything solid.

Some of our best thoughts, finest plot twists and character quirks have probably been thought up in the smallest room. And if we allow our characters to take a trip to the toilet too (even if only in our imagination and not on the page), then as writers of historical fiction, we may discover that the closet contains insights that are not to be sniffed at.

I know this because, in my first novel, I wanted to murder a character while he was relieving himself at the back of a tavern, and I needed to have an idea of what that ‘back of the tavern’ might have looked like in the eighteenth century. So it was that I spent a whole week researching the history of toilets. Allow me to share.

Excavations in India have revealed drainage systems that are four thousand years old – which may have been used with toilets. In Europe, Neolithic Scots and ancient Greeks had pans and water. Romans (who else?) viewed visiting the toilet as a social event – an opportunity to catch up with friends while sitting on a hole-filled bench. The ‘product’ was carried away by a water channel and you wiped yourself with a sponge on a stick. For some reason, this very efficient and rather sociable system died out and, by the Middle Ages, in Britain, we were filling pots (potties) and throwing the contents into the street or the river – and often not using pots at all. The first attempts at flushing toilets came in the sixteenth century, but it was not until the second half of the nineteenth century that cisterns, S-bends, and decent sewers came into being, and not until well into the twentieth century that houses had private toilets as standard. So, if you are setting a novel at any point before the Second World War, your characters will be doing their business in a shared privy, or in a pan. Or they might be carrying the pan.

Which leads me neatly on to the first observation. How you deal with your personal waste will depend upon your wealth and status. Queen Elizabeth I had a private commode, scented with pleasant herbs, but her subjects in the countryside made do with lanes, hedges, or bridges over rivers, and those in the city with cesspits and communal latrines and outhouses. In the seventeenth century, Samuel Pepys commented on how a heap of excrement was making its way into his cellar from his neighbour’s ‘house of office’, but the neighbour did, at least, have a private space. If your character has means, and land, there could be a small, private outhouse in the garden.

If you had to go at night, then you would use a pot and throw the contents into the street or river in the morning, but if your character is a servant, then he, or more probably she, will be tipping the contents of someone else’s pot into a covered bucket and carrying it away. A chamber maid does more than flick away dust and open curtains.

Look at the clothes your characters are wearing whenever you are contemplating sending them for a visit. Men had flaps and flies, front and back. They simply undo, lift and go. Women had layers of skirts, but, until the nineteenth century, they rarely wore underwear. So, in theory, one could just ‘go’ – squatting down and lifting up the fabric of your skirts to prevent splashing. But it might be a cumbersome exercise. I did discover the delightful bourdaloue – something that looks like a gravy boat, which, in the eighteenth century, you could shove under your skirts, grip with your thighs, and pee into if you were caught short, while maintaining a degree of dignity. I can’t look at a gravy boat in the same way anymore…

Where there’s muck, there’s brass. The nightmen, or night soil men were so called because they worked at night, collecting up the ‘soil’ from cesspits, privies, latrines, and loading it on to carts before mixing it with other rubbish and selling it on to farmers as manure. It was, we might only imagine, a filthy and thankless task, but certainly by the eighteenth century, Nightmen were advertising their services with calling cards – and no doubt charging healthy amounts from the rich to take their waste away.

On the other hand, faecal matter, left out in the street, or dropped into a river will, of course, cause the place to stink – you might want to consider what your landscape smells like. It was the ‘Great Stink’ of 1858 that led to Joseph Bazalgette’s impressive sewerage system for London. The burgeoning population, and the warm summer of that year, meant that MPs talked of abandoning business at Westminster and moving to Oxford or St Albans, while tons of lime was poured into the Thames – which had become one long stinking slurry.

In 1854, John Snow recognised the connection between cholera and contaminated water, but it was Bazalgette’s system, taking sewage away from drinking water, that brought a halt to the London cholera epidemics. It might be obvious to us now that raw sewage in drinking water will cause disease, but it was not obvious until then; people attributed cholera to the ‘miasma’ that wafted up from the effluent in the river. As always, it was the city’s poorest who came off worst. Writers of historical fiction should pay attention to what was known, believed, and understood about disease in the period they are writing – even if we know better.

What did I find at the back of my eighteenth-century tavern? Well, armed with my research, and a few Hogarth pictures and other drawings as inspiration, I imagined a small courtyard full of rat-infested rubbish, piled with barrel staves and animal bones and old sacking, that the tavern keeper was too mean to pay to be taken away by soil men. It was there that one man went out – apparently to relieve himself – and met an untimely end.

One final thought: around the world, there are people who still, in 2020, have inadequate toilet facilities. Disease still spreads through poor sanitation. There are charities around, such as www.toilettwinning.org working to make ‘going to the loo’ a healthier experience for everyone.

P.S. If you want more tips on accuracy and authenticity in historical fiction, make sure you download The History Quill’s full guide below.

Georgina Clarke is the author of historical mystery books Death and the Harlot and The Corpse Played Dead. Find her on Twitter at @clarkegeorgina1.