Foreshadowing: what it is and how to use it in your writing 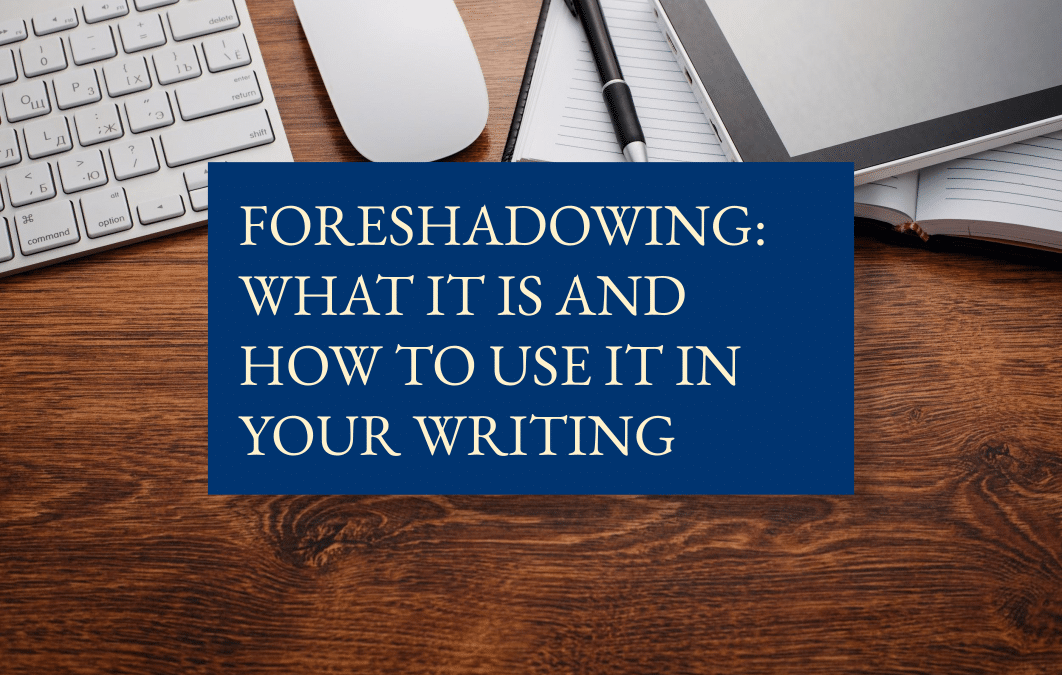 If you’d met her that day, you too would have thought her a good person. There was nothing to suggest otherwise.

Welcome to foreshadowing: a literary device that’s used to hint at what’s to come. It’s designed to increase tension and keep us turning pages. As a reader, it’s a technique you’ll have come across time and again. As a writer, it’s well worth exploring because it’s an invaluable tool to have at your disposal. It can give depth to your story and help you sow the seeds for what’s to follow, adding credibility to both character and plot. Below are five ways to use foreshadowing in your writing.

1) To get to the heart of a character

At the start of The Talented Mr Ripley, by Patricia Highsmith, we find our anti-hero sending letters on stationery he’s stolen from the Internal Revenue office. He informs the recipients that they must pay their tax ‘fines’ by cheque straight to his address. Immediately, we know he’s a thief and a forger; this foreshadows the fact that Ripley later pulls off the most audacious scam of all, stealing the identity of Dickie Greenleaf.

In the film, the foreshadowing is necessarily more visual. We see Ripley trying on Dickie’s clothes as he dances around the room alone. Two other scenes show him impersonating his voice and practising Dickie’s signature. It’s all done lightly, with a touch of humour. Later, when someone mistakes Tom for Dickie, he doesn’t correct them. It suddenly occurs to Ripley (and us) that of course he could be Dickie. He’s certainly prepared for it, hasn’t he? All the foreshadowing has led us to this, so it’s completely credible.

2) To tell us about emotions

There are many ways to foreshadow emotions or mood, but depicting weather is one of the most popular and can be used to great effect. My debut, She Came to Stay, is set during the toxic five-day smog that choked London in 1952.

I wanted to foreshadow the ambiguous, perilous friendship between Dina, the main character, and her secretive friend Bebba. As Bebba’s duplicitous nature comes to light, Dina stumbles through the thickening fog, getting lost; what was once familiar becomes unknown, what was safe is dangerous. The weather foreshadows what’s about to happen. Dina has misplaced her trust in Bebba, endangering her own life.

3) As a motif, symbol or image

Attaching a specific motif to a character can become a shorthand for who they are, and can also help you echo themes that run through your entire story.

For example, Miss Haversham in Great Expectations is a jilted bride who sits in her decaying house, wearing her moth-eaten wedding dress. Clearly, Charles Dickens wanted to create a striking image for lost love, but her presence doesn’t just inform us about her story. She also foreshadows the unhappy emotional lives facing Pip and Estella in years to come. Estella’s husband is cruel, and she suffers for many years. Pip (who has desperately loved her) doesn’t get what he wants, either. Love is not easy, and Miss Haversham is the perfect symbol of how wrong it can go, foreshadowing for all she’s worth in her tattered wedding gown!

Dickens was particularly adept at foreshadowing, and one of his most famous images is at the start of A Tale Of Two Cities. A splintered cask spills red wine onto the cobbled streets of Paris. Destitute citizens drink it greedily. This image is echoed later when the blood flows through the streets of Paris as the French Revolution takes hold, and people are ‘drunk’ on the chaos and caught up in the violence.

In Sarah Waters’ Fingersmith, young Sue watches Oliver Twist performed on stage and is distraught by Bill Sikes’ treatment of Nancy. This foreshadows what happens to Sue later, in adulthood, when she encounters a ‘Sikes’ of her own. Having seen her horror as a child when faced with such (fictional) evil, how will she fare when this happens to her in real life? Is she resilient enough to survive? The foreshadowing has given us an insight into her psyche and we’re now even more invested in her character.

From the very first lines in Wolf Hall to the last scene of her trilogy, The Mirror and The Light, Hilary Mantel uses foreshadowing to explore themes of power and corruption.

The first words: ‘So now get up’ find a young Thomas Cromwell lying on the cobbles in his father’s shadow having just suffered a beating.  Aware of his vulnerability, Thomas knows, ‘One blow, properly placed, could kill him now.’

Three books later, as he approaches his execution, Cromwell has been thinking of his father. The final scene in the trilogy sees him again bent over, aware that one blow, properly placed, will kill him. Mantel even repeats the lines from the start. ‘A shadow falls across his view. His father, Walter is here, voice in the air. “So now get up.” He lies broken on the cobbles…’

He was at his father’s mercy at the start and here he is, at the mercy of King Henry VIII. He came from nothing, rose to power and leaves with nothing. Proving the theme that wealth and power corrupts and destroys.

Foreshadowing is a delicate business, so avoid spoilers or hefty nudges in a certain direction. Readers are sophisticated, and creating a general sense of unease will result in more tension than a big arrow that screams, ‘Look! A clue about what’s going to happen!’ Heavy-handedness can result in melodrama.

Finish your draft and go back to sew in the foreshadowing later – many authors work like this to create depth.

3) Don’t foreshadow for the sake of it.

It can be exhausting for the reader because they simply won’t know what’s important. Decide what you’re trying to get across and focus on that.

4) Once you’ve finished a draft, ask someone else to read your work and question them.

In retrospect, was the foreshadowing too obvious? Did they ‘guess’ what you were doing? Did it spoil the flow of the story?

Eleni Kyriacou is an award-winning editor and journalist. Her debut novel, She Came to Stay, is a thriller about Greek Cypriot immigrants, set in 1952 Soho, London. It’s an Amazon number 1 bestseller and was longlisted for the Guardian’s Not the Booker Prize. Follow Eleni on Twitter (and Instagram and Facebook) @elenikwriter, or visit her website: elenikwriter.com.