No, I promise I’m not moonlighting as a personal trainer. When I talk about a sagging middle, I’m referring to the way some stories lose their momentum as they reach the halfway point. It’s a common problem – affecting perhaps 10 per cent of the manuscripts I edit – but the good news is it’s completely fixable.

In this blog, I’ll take you through five of the best ways to fix it. If you want to know how to tell whether your novel has a sagging middle, you can also download my free accompanying crib sheet: Five signs of a sagging middle.

FIVE SIGNS OF A SAGGING MIDDLE

GET THE CRIB SHEET

If your novel is losing its momentum around the halfway point, adding a twist is an excellent way to inject some energy and excitement back into it. Twists can spin your plot in unexpected directions, force your readers to re-imagine characters and events, and introduce fresh mysteries and intrigues.

Here are some classic twist ideas:

1) A betrayal. Perhaps one of your protagonist’s ostensible allies betrays them, putting them and/or their story goal in jeopardy. This will shake up your plot and the relationships between your characters.

2) A purported villain shows their true colours. Maybe one of your villains isn’t so bad after all. They could do something to suggest their true allegiance isn’t as the reader thought or that they might be wrestling with internal conflict over their actions.

3) Not everything is what it seems. You could surprise your reader by subverting their basic assumptions. There are a number of ways to do this, including by hinting that your narrator is unreliable, suggesting that your protagonist has been misled, or showing that another character is lying about something important.

Stakes refer to the consequences of your story. Why does it matter whether the protagonist succeeds or fails? What will happen as a result?

If your story is starting to flag, a great way of reigniting reader interest is to up the stakes. For example, imagine a story about a police detective who’s tasked with investigating a series of killings. At first, the stakes focus on the importance of attaining justice. But imagine the killer strikes again, abducting an innocent person. The detective knows from the killer’s modus operandi that he now has 48 hours to crack the case or else the victim will be found dead. This ups the stakes because a person’s life is now in jeopardy.

Upping the stakes grips the reader because it makes the story matter more. It gives the race to the outcome a new sense of importance and urgency.

If your story is losing its edge around the halfway point, perhaps it’s because not enough is going wrong. Sometimes, writers are too quick to set their protagonist on a path of success, allowing the elements of the plot to fall into place too neatly and too much in their protagonist’s favour.

In truth, you should be doing the opposite. Usually, things should get progressively worse for your protagonist as they struggle to overcome the obstacles placed in their way, until finally the story comes to a head around the make-or-break climax.

Adding a setback around the halfway point is a good way of correcting the tendency to make things too easy. Perhaps your protagonist could lose something of vital importance, or perhaps they’re temporarily defeated in love or war. Maybe they could be imprisoned or injured. In any case, things should go badly wrong, making it difficult for the reader to imagine how the protagonist could possibly recover.

While perhaps a little less inventive than the ideas above, adding some action is rarely a bad idea if your story is grinding to a halt. Remember, action doesn’t have to be violent; it can take many forms depending on your genre, readership, and plot. But whether it’s a bloody battle or a confrontation between feuding relatives, action serves to increase the pace of the story, add drama and tension, and create possibilities for twists and setbacks.

Sometimes, if a writer doesn’t know how exactly to get their story from a to b, its middle can get weighed down by superfluous details and scenes that lead nowhere. If you think there may be too much meat on the bones of your story, then cutting will obviously help.

Certainly, cutting is a difficult process. But it’s worth it. If you succeed in trimming the fat, you should be left with a story that can better sustain reader interest with its faster pace and more focused plot.

With these fixes, you should be able to break the curse of the sagging middle. But how do you know whether your story has one in the first place? If you want to find out, download my free crib sheet: Five signs of a sagging middle.

FIVE SIGNS OF A SAGGING MIDDLE

GET THE CRIB SHEET 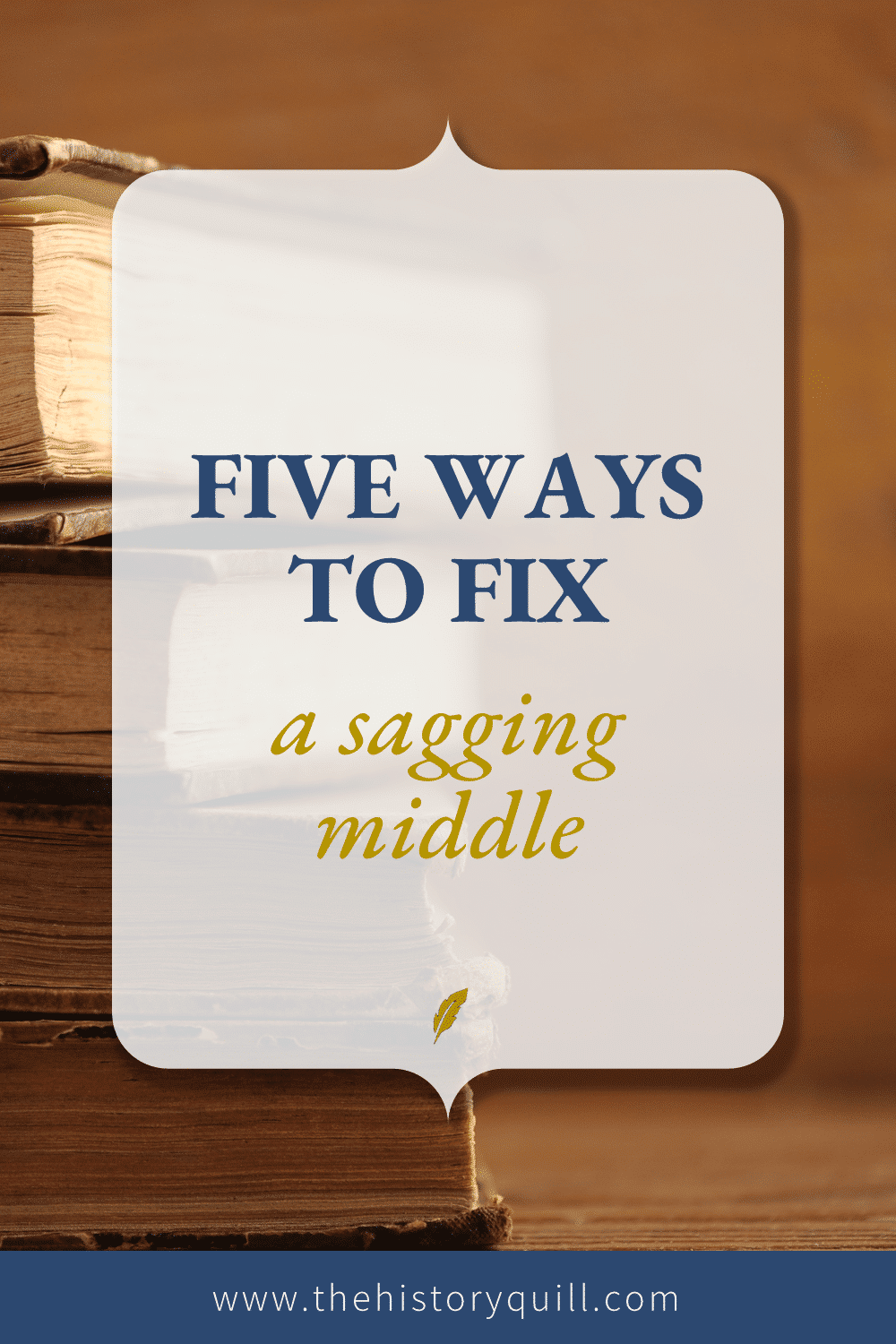 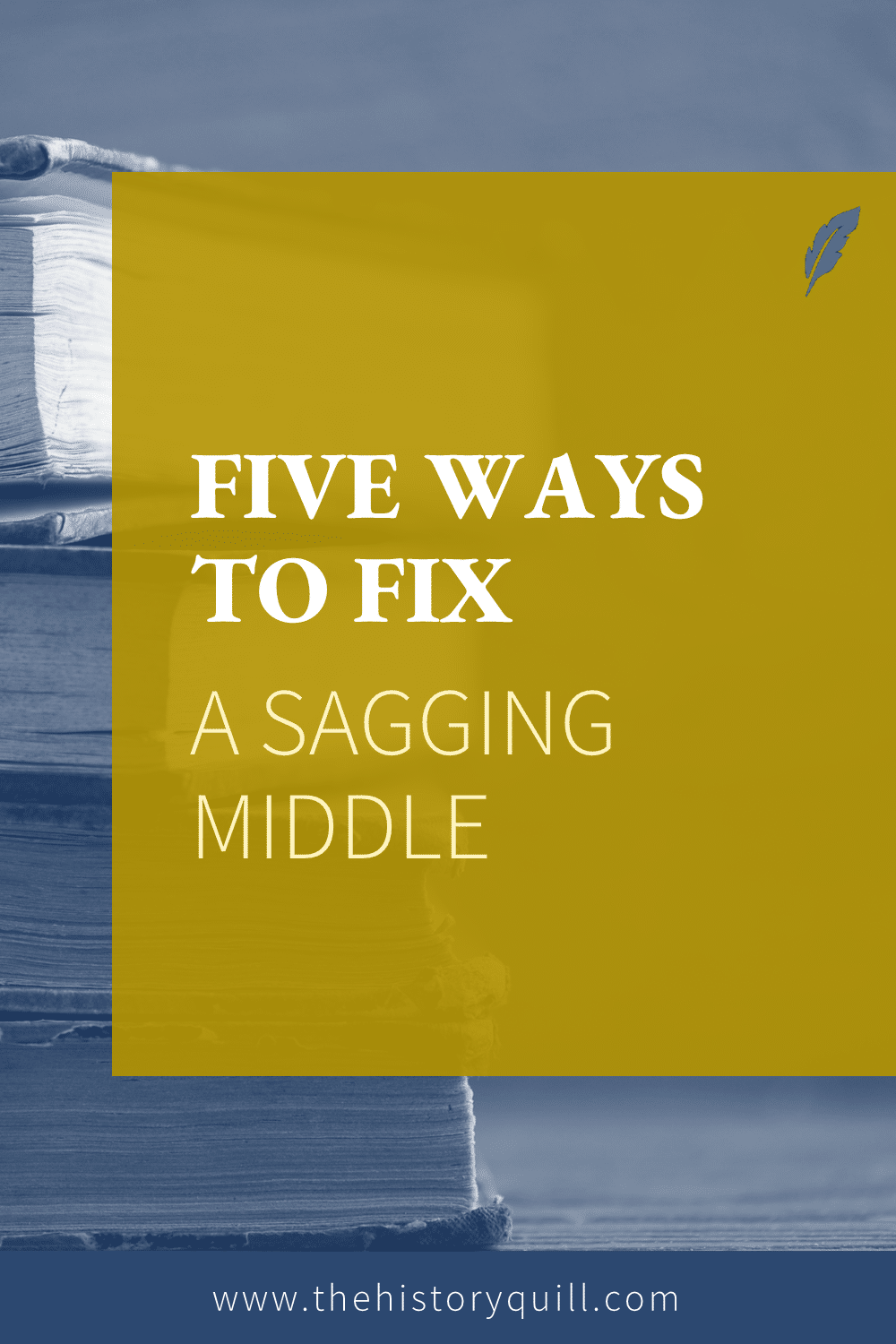