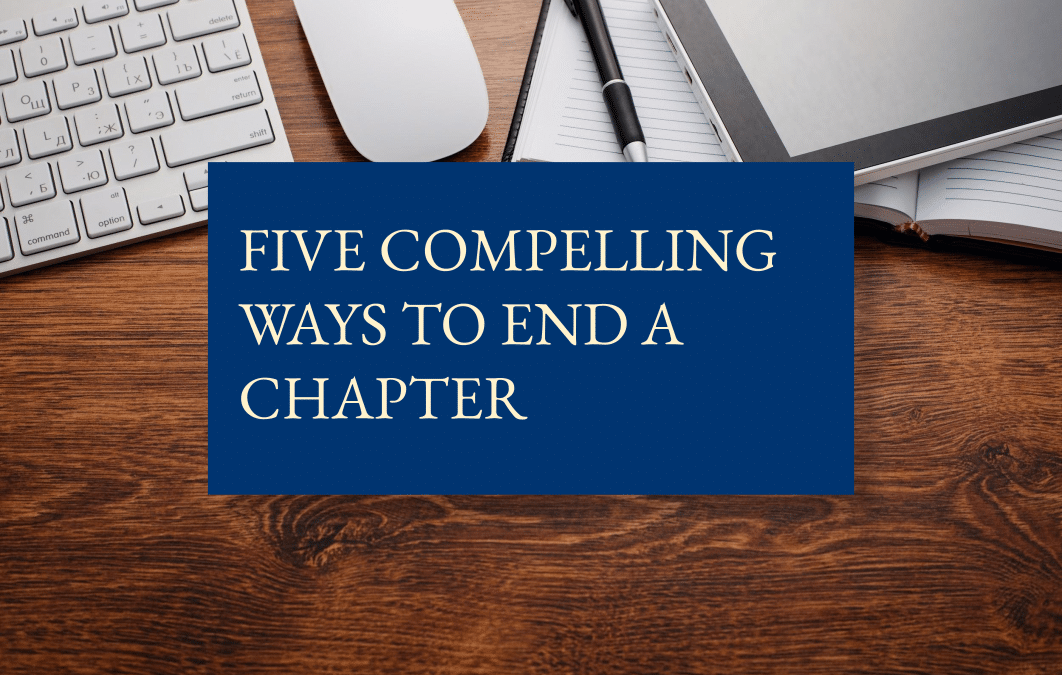 The phrase “page-turner” is synonymous with our idea of a good book. Go onto any bestseller’s Amazon reviews and I am willing to bet a fair few say, “I couldn’t put it down!”.

Think of all the really good books you’ve read to which you found yourself saying “just one more chapter” – and that one extra chapter turned into four or five extra chapters. Conversely, take a look at your “to read” pile. It’s probably on the bedside table. Books that lost your interest, with a receipt bookmark somewhere around a third of the way in. Books destined to go to the charity shop along with a shirt that doesn’t fit anymore and some tat from last year’s office Secret Santa.

The difference is, how the chapters ended. You need to be Scheherazade to your readers. Always keep them wanting more. By ending your chapters well, you’re setting them up to want to keep engaging with the plot. It also helps keep your writing exciting and will motivate you to hit your word count goals.

Now, you don’t have to do a Dallas and end each chapter on a life-or-death cliff-hanger, but solid chapter endings benefit your book. For you as a writer, for your audience as readers, and commercially, by creating an engaging product. With that in mind, here are five compelling ways to end a chapter.

This is the classic “Luke, I am your father” moment.

Dramatic revelations can take many forms. This could be an opposite – where a previously cold protagonist suddenly confesses their love, for example. Or it could be big news: war has been declared, or the power structure of a group has suddenly shifted.

A dramatic revelation is the narrative equivalent of a brick through a window. The revelation is interesting, but the exciting part is the reactions of your protagonists to the event. That will make your reader continue to the next chapter. Will they be joyous? Explosively angry? What happens when the same news provokes contrary reactions in a group?

Let’s say you’re writing a novel set in Edwardian England. When war is declared and the main protagonist is desperate to sign up and fight, but his fiancée doesn’t want him to, you’ve got instant drama. Drama which flows from the dramatic revelation in the previous chapter.

With a dramatic revelation, you know what’s happened, who has done it and possible motivations. Maybe not all the intimate details, but the butler announcing to the assembled servants, “We are at war with Germany” tells your reader what’s happening. War has been declared is the what, who is the butler, and why is the historical context of the novel.

Conversely, with an intriguing mystery, you know what has happened. But you don’t know who or why.

Upon going to his gun cabinet, His Lordship finds a pistol is missing. Who has taken it and why is the mystery.

A mystery doesn’t have to be a classic whodunit theft or murder. It could be aid from an unknown patron, an anonymous love letter, or the abrupt departure of a loyal servant. It’s anything that can be investigated and discussed.

When you end a chapter on a mystery, you’re promising a payoff later on. Don’t betray your reader’s trust with a “clever” solution. Your ego is not your amigo; don’t fall into the trap of having a mystery that no one could have possibly seen coming or that relies on some improbable twist of fate.

If it turns out that the vicar is a Hungarian spy, there needs to be some kind of indication. For example, they seem to be prodding and not particularly enjoying the goulash at dinner (they never make it properly over here). This is an apparently insignificant detail that offers payoff later on.

3. Something which doesn’t make sense

Similarly to An intriguing mystery, Something which doesn’t make sense draws the reader in by playing on their desire to find out more. The key difference between the two is that the former has threads to pull. With His Lordship’s gun cabinet, the characters can start asking questions, like who had access to it or who would want a weapon. Something which doesn’t make sense, by contrast, is a spare jigsaw piece.

All of the pheasants have died overnight. Maybe the village pub exploded. What’s important is that the reader will be desperate to figure out what has happened.

Something which doesn’t make sense is about the seeming implausibility or unexpectedness of the incident. Sure, the pheasants have all died, but what exactly has happened here will remain unknown until this fact falls into place like our spare jigsaw piece.

Although murders can obviously fall under the heading of An intriguing mystery, corpses deserve their own category. If you’re penning a murder mystery or detective book, bodies can rack up at a frankly worrying pace. Killing off a protagonist is never something to be done lightly, but by sticking a dead body at the end of the chapter, you give your readers an emotional slap in the face to pay attention. The reactions from the survivors and the emotions of a death can give your characters plenty of screen time. Mind you, the obvious flaw in ending a chapter by killing a character is that the character is now dead. Short of flashbacks, they aren’t going to be contributing anything more to the plot.

Picking who to kill off is an art form in itself. Too important and your plot arc changes dramatically. Too minor and your reader won’t care.

5. The unexpected return of…

Bernard Cornwell does this a lot, especially in Uhtred books. This is particularly useful if you’re writing a series with a big background cast, or one that spans many years. A hated villain or fan-favourite character sticking their head round the door always shakes things up. The drama and emotion that your characters feel from seeing an old friend or bitter rival are bound to get your words flowing. Your reader will instantly start asking questions – Why are they here? What do they want? – which will spur them on to read the next chapter.

You see this a lot on TV soaps. Who could forget Dirty Den returning to Eastenders? Although this is one of the most powerful ways to end a chapter – setting your reader up to see what this recurring character is going to get up to – it must be used sparingly.

The last thing you want is for your readers to think, “Oh, it’s him again.”

Hopefully, this will give you a few ideas on how to end your chapters and win your book the coveted “page-turner” accolade. But however you end it, remember: Dallas ran for thirteen years for a reason.

Jack Shannon is a regular guest contributor to The History Quill. He is the author of Brigandine – a dark, bloody fantasy where unfortunately for Ulf (and everyone else), magic is returning to the land of Ashenfell. It has quite a few sword fights and a healthy dose of Lovecraft. Due out next year, Brigandine is published by Big Small Town Books. Why not give him a follow on Twitter? @Jack_Shannon