An ode to overlooked sources: using ballads and poems for research 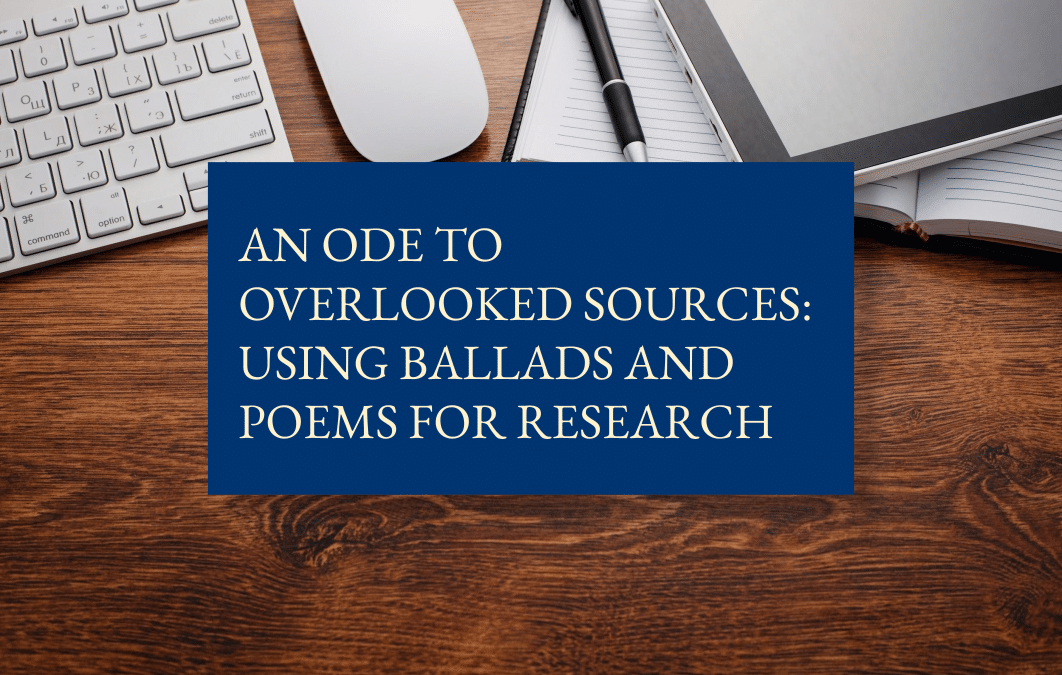 In my work as an author of both factual history books and novels, I like to make the background details and the lives of my characters as authentic as possible. Official contemporary documents can provide some evidence – who did what, when and where – but they don’t often give any sense of ‘atmosphere’. I want to know how people managed their everyday lives; what was it like to be the wife of a ploughman or a country lad in the big city for the first time? I need to hear the noise, smell the stinks and feel the cloth.

This is where ballads and poems can be a great source for writers. Ballads were a way of telling stories, passing on news or relating current events for the illiterate. The heyday of news ballads was the seventeenth century when, during the English Civil War, both Royalists and Roundheads spread their point of view by means of pamphlets for those who could read and by ballad singers for those who couldn’t. My main interest is the medieval period. Although few ballads survive from that period, being written down only rarely and so unimportant at the time nobody troubled to preserve them, they do exist.

The Ballad of the Tyrannical Husband

There is a fifteenth-century poem, although it would seem to be based on an earlier text, called ‘The Ballad of the Tyrannical Husband’. The work is anonymous, probably because it was written down long after it was first composed, and the end is missing – sadly for us, as will become apparent. It draws a picture of the life of a ploughman’s wife, and there are two things to bear in mind with this source. Firstly, a ploughman was a well-paid agricultural worker, not the poorest. Secondly, the ballad is comparable to modern stand-up comedy in that it’s exaggerated but must be recognisably familiar to the audience.

The balladeer addresses his song to ‘good sirs’ but the audience would likely be mixed. It’s been suggested it might have been written by a woman for a female audience. The ballad tells of a bad-tempered ploughman off to work, taking his apprentice, his horse and two oxen to help with his labours in the fields. He warns his wife to have his dinner ready on time. The wife has been up in the night, tending the baby, then rose before dawn ­– while her husband was still asleep – to begin her daily chores. She has no servant but many small children, too young to help, needing her constant care. When the ploughman returns for dinner, the meal isn’t ready. He complains, saying he’s been working so hard while she wastes time, chatting and drinking with the neighbours.

As you can imagine, his wife gives as good as she gets, listing all the tasks that fill her day, and it’s a long one. The husband reckons any decent wife would have her work done by 6am, so he challenges her: tomorrow, she can go plough the field and he will be the housewife. Easy! She accepts the challenge but, realising he doesn’t know how to do half the chores, she says she’ll rise extra early to prepare food for the day and see to the children before she goes to the fields. ‘Teach me no more housewifery,’ he cries, ‘I know enough.’ And we all want to know whether he managed or not, don’t we?

The balladeer pauses here to call for a drink. ‘Here beginneth another section,’ he says, but the rest of the text is lost, so we’ll never know who won the challenge but we can probably guess. This ballad is a great source to give writers an insight into the lives of country folk when every job had to be done from scratch, as well as a glimpse of marital relationships.

In ‘London Lickpenny’ by the fifteenth-century poet John Lydgate, we get a real sense of life in London and Westminster as seen by a poor country lad up from rural Kent. He hopes to bring a case before a court at Westminster but lawyers, judges and clerks aren’t interested unless he has a fat purse and send him away – men of law are stereotyped as ‘only in it for the money’. He has already had his hood stolen in the crowds.

Disappointed, our protagonist walks to London where the city is bustling. Would-be vendors ply him with food, drink, music, fine clothes – all can be had, if you can pay, but our innocent lad is penniless. Incidentally, the food on offer tells us the story is set in June or July, when peascods (we would recognise them as mange-tout or sugar snaps), strawberries and cherries are in season. Hungry and thirsty, the worst insult is when he sees his own hood, stolen earlier, there for sale and he can’t afford to buy it back. Footsore and having spent the day to no avail, he asks a bargeman to take him down river, back to his home in Kent. The bargeman tells him he doesn’t work for charity, so unless he can pay tuppence…

Here is a brilliant glimpse of a vibrant medieval city – busy, colourful and expensive, with an undercurrent of petty crime. Incidental information is given on food, fashion and services available in medieval London. All can add authenticity to your historical setting.

This ballad, with its well-known melody, is often attributed to Henry VIII but is preserved in an Elizabethan song book as a ‘northern ditty’, so the king is an unlikely composer. Besides, the lyrics to ‘Lady Greensleeves’ date to the century earlier. I want to point out the significance of green sleeves. Detachable sleeves could be laced to a gown or doublet and were an interchangeable fashion accessory, to be removed depending on the weather. So we learn a ‘pair of sleeves’ were considered a most suitable gift exchanged by lovers. The colour green indicated loyalty in love. Not to be confused with ‘a green gown’. This was a term for a woman of loose morals, willing to lie on the grass in the name of love – or business – staining her clothes green in the process.

I hope sources like these, from any era, may give authors more inspiration for setting the scene in their historical novels.

Toni Mount is a guest contributor to The History Quill. Toni studies, teaches and writes history and is the author of factual popular history books on subjects as varied as Everyday Life in Medieval London and How to Survive in Medieval England to The World of Isaac Newton. She also writes the Sebastian Foxley medieval murder mysteries set in London in the late fifteenth century. Toni writes for various history magazines, is a member of the Richard III Society’s Research Committee, and belongs to the Crime Writers’ Association. She lives in Kent, England.