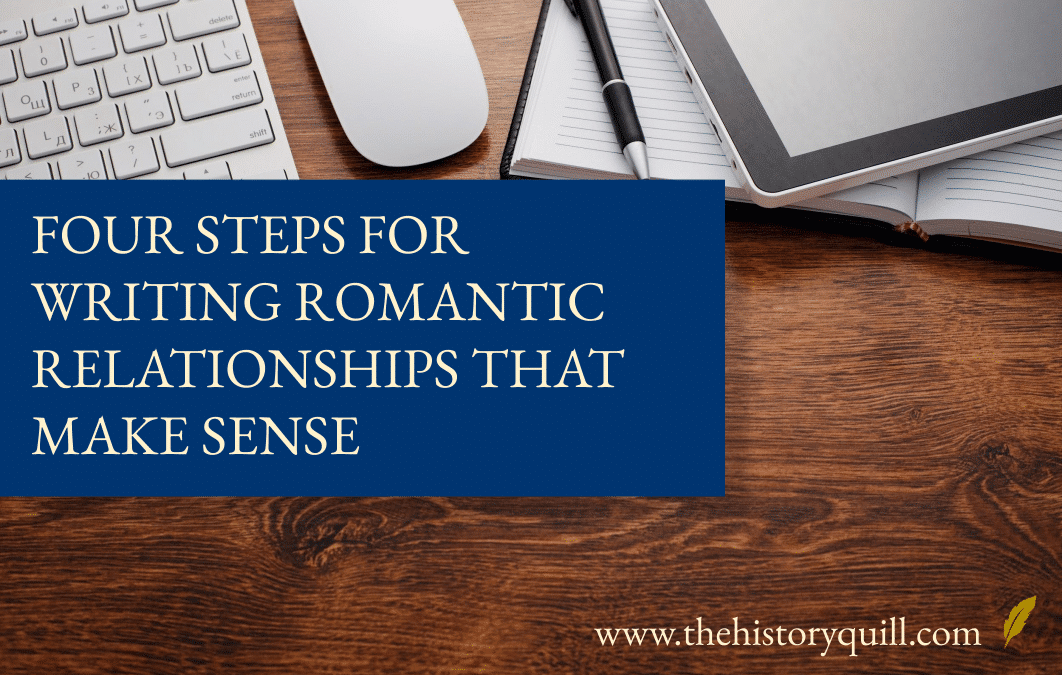 Even if your story is not a historical romance, you may still want to incorporate a romantic subplot for that extra dose of spice and emotional depth.

But you want to do it well. You’ve read your share of predictable, throwaway relationship subplots that left you feeling cold.

“Why are these two even together?” you’ve asked. “What does she see in this guy? Do relationships actually work this way for anyone?”

All too often, it seems as if we are simply supposed to take these blossoming relationships for granted. Some popular story structure models go so far as to include a romantic subplot as an obligatory element of a novel, which may be why many feel hasty and tacked-on and, well, just don’t make sense.

How can you make sure your characters’ romance will be different? Start with these four steps.

Relationships are complex, but to get the reader rooting for your couple, choose just one main connection that brings them together.

Perhaps it’s something they have in common, something that’s always made them feel alone in the world. Whether it’s the two characters finishing each other’s sentences during a pivotal moment or the reader seeing how their inner monologues echo each other, this is a connection that leaves each thinking, “I never thought I’d meet someone who understands.”

Or perhaps your couple’s “one thing” is just the opposite: a way in which their differences complement each other, compensating for weaknesses and bringing out strengths. Whether the lovers find themselves intrigued or annoyed by their big difference, this connection gives them plenty of food for thought and, eventually, growth.

If you’ve done your characterization well, readers will channel their inner matchmaker and pick up on this foundation before the narrative spells it out: “Ooh, of course the main character is interested in this person! He/she is just what the main character needs!”

For inspiration, look to your favorite literary couples in literature. Dig deep enough, and you’ll probably find one kernel of similarity or difference that makes them click.

Step 2: Show what makes the characters attractive to each other

While the foundation built in Step 1 is crucial, the truth is that it could be the basis of a friendship or mentorship just as easily as that of a romantic relationship.

That means you must also make it clear why the characters are attracted to each other.

The fact that the love interest happens to be the right age and gender for your main character’s tastes is not enough. Are you attracted to every single individual you could feasibly have a relationship with? Neither is your character.

We may forget to do this because we tend to model our stories’ love interests (and even main characters) on our own fantasies. It’s all too easy to assume that the reader will find them as obviously attractive as we do. But bulging muscles or a fiery temper might be a turn-on or a turn-off, depending on who you ask.

That’s why it’s so important to show readers what’s attractive about a character’s love interest to him or her personally, be it physical (“He had the deep blue eyes she thought existed only in her dreams.”) or otherwise (“Up on that podium, she was like a goddess. I had never known a woman who spoke with such conviction.”).

If there’s one thing that will irk seasoned readers about romantic relationships in stories, it’s insta-love (“instant love” – romantic feelings that seem to arise from nowhere). And with good reason. It’s not merely cliched; it’s poor storytelling that shies away from the real work of developing a relationship on the page.

Different readers have different thresholds for what’s considered insta-love, but all alleged cases have one thing in common: a dearth of interactions between the lovers.

Go through your outline or first draft and highlight all of the conversations your two characters have before breaking out the L word. Consider what they know about each other based on these. If your main character is already smitten with the love interest before these conversations take place, consider how likely it is that the love interest will live up to his or her dreamy first impression.

Let the couple have real conversations, not just longing glances and fleeting touches. Discerning readers won’t be convinced by a relationship built on these things.

Step 4: Weave the romance into the story as a whole

A good romantic relationship also makes sense in the context of the larger story. In many storytelling models, the romance is the B Story, leading many writers to think of their romance as something separate from the rest of the story, neither affecting nor affected by the events of the plot in any meaningful way.

Ask yourself what the romance adds to the story itself. How might the connection at the foundation of their relationship (see Step 1) reflect the story’s theme? How do the ups and downs of the relationship affect the main character’s actions? Could the romance serve to increase the stakes of the central conflict?

The best romantic subplots are more than a happily-ever-after prize or an outlet for the main character’s angst over the obstacles the plot throws at him or her. They’re an integral thread in the tapestry of the story.

In stories, as in everyday life, romance can seem mysterious. We can be attracted to someone – or even spend years with them – without being able to articulate exactly why.

As writers, however, we are asking readers to invest their emotions in a relationship they never directly experience. To achieve this feat and trigger those emotions, we must create a snapshot simulation of the relationships they know.

And they know that every relationship is a story that begins with a simple but powerful electric spark (step 1) that channels its energy as attraction (step 2), is packed with meaningful interaction (step 3), and fits into the greater stories of the lovers’ lives as a whole (step 4).