Authentic profanity: an author’s guide to swearing in historical fiction 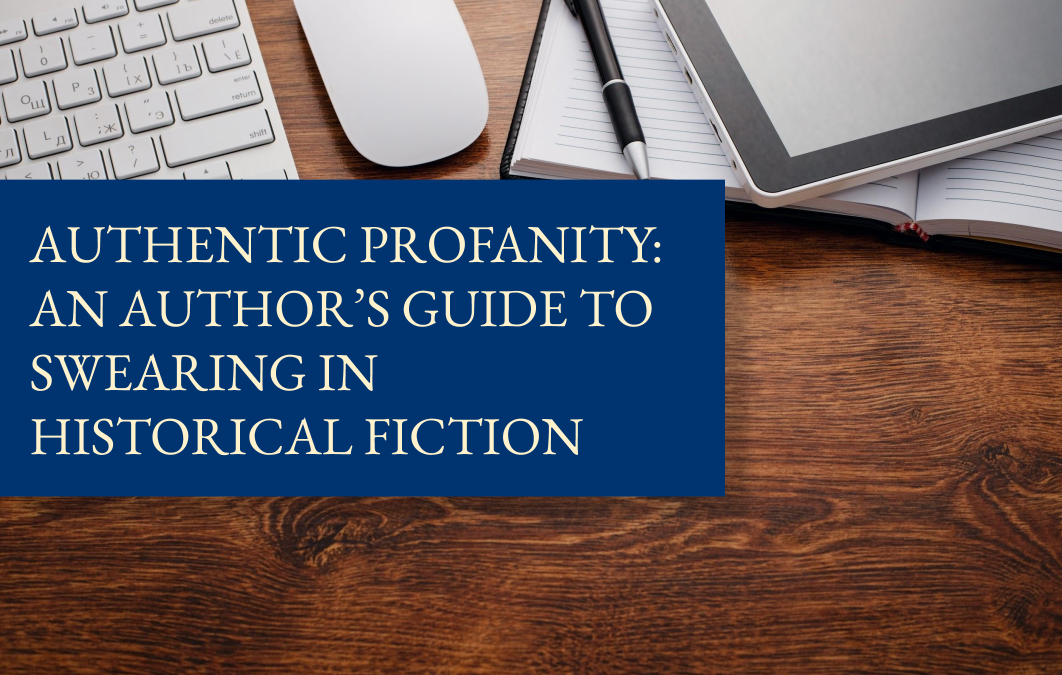 Writing historical fiction presents its own particular challenges, not least when it comes to dialogue. How does an author create a sense of time and place without sounding faux-archaic or having characters proclaim “ye olde clichés”? Worse still, the unwitting author can sometimes use words or phrases of sufficient modernity to rudely jerk the reader out of their pleasant suspension of disbelief. I have done that myself, which is why this has become a topic close to my own heart. The thing that brings it into sharpest focus is swearing.

Swearing is an extremely useful item for any writer to have in their toolbox. The technical term for swearing is ‘using intensifiers’, and indeed that is exactly what it does. A carefully used, well-placed curse can give a character’s emotion more impact on the reader than a whole paragraph of description. It portrays that character’s mood or mental state in the most immediate manner. If you get it wrong, however, it can sound gratuitous, silly, or just plain anachronistic.

Most serious historical fiction authors will go to great lengths to try to be authentic to the events and culture of the time period they are writing in. Unfortunately, when it comes to cursing, a problem arises where what once sounded shocking to our ancestors now seems banal, childish or worse, laughable. In contrast, the everyday language used in the past can now be deemed unacceptable.

Using authentic curses can just seem plain odd to a modern reader. In sixth form, I had to read Sheridan’s School for Scandal and recall the hilarity with which we snotty-nosed 1980s kids regarded each utterance of Egad or Sdeath, 18th Century expletives which would have then been regarded as outrageous. The text’s original readers found the “D” word so terrible it could only be printed as D___ (I am talking about “Damn” by the way, in case you were thinking of another D word). Shakespeare’s use of curses like Swounds or Sblood met similar chortling.

In his Holcroft Blood series, set in the 17th Century, Angus Donald is careful to scatter enough original slang through his dialogue to give a sense of the era without overwhelming the reader with obscure or (to modern eyes) laughable expletives. Despite the name of the main character, Donald avoids using too much authentic swearing like Sblood. This once-shocking curse is a contraction of “By God’s Blood”, which gives us a clue to the origins of swearing. In the past, people first swore by their gods. They made oaths, promises to achieve deeds that they asked their Deities to witness and approve or aid them in their endeavors to fulfil them. It was the solemnity of the religious element that originally brought censure to swearing. These were words that should only be said in the most serious of circumstances.

Many of Geoffrey Chaucer’s characters in The Canterbury Tales decry such blasphemous oaths, which were sworn on the body and bones of God. By contrast, some words once regarded as perfectly acceptable in Chaucer’s day are now seen as rather rude. Writing in the 14th Century, Chaucer makes free use of the C-word, something which will get a modern writer an immediate adults-only rating. Today, Chaucer has a bit of a reputation generally for being rather potty-mouthed, but he was only using the everyday English of his time. In Chaucer’s day, a lot of the words he used for defecation and the more intimate parts of the body were acceptable enough to be used in the contemporary translation of the Bible into English by John Wycliffe. This concept has become so engrained that the alternative name for Old English, Anglo-Saxon, has become a euphemism for profanity in our time.

When writing about actual Anglo-Saxons in his Saxon Stories/Last Kingdom series, the historical fiction author Bernard Cornwell utilizes typical Old English words such as those used by Chaucer, which are now seen as profanities. Though Cornwell is also careful not to use the “F” word. It appears this did not enter the English language until the late medieval period, so for his main character, Uhtred of Bebbanburg, who lived in the 10th Century, it would be an anachronism. Though Cornwell does also make free use of the “B” word, a term for an illegitimate child that would not have been used in Britain until after the Norman Conquest. Even then, it did not become a generic vulgar term of abuse for a man (which is how Cornwell uses it) until centuries later. However, it sounds right, like it would be the sort of thing a down-to-earth Saxon warrior would say.

If writers want to be truly authentic, they would have to use all the language of the time. In Cornwell’s case, this would mean writing in Old English. And let’s face it, he would not sell too many copies if he attempted that. The issue is doubled for those writing in a time or era where the language was not even English at all. The Romans had ample examples of their own swearing and insults, but unless someone is fluent in Latin or a Classical scholar, these words tend not to retain their original impact.

In the end, the trick is to use swearing that may be old fashioned but will create the illusion of historical authenticity without alienating the modern reader. That is why “historical fiction” has the word “fiction in it. Otherwise it would just be history.

Tim Hodkinson is a writer of historical fiction from Northern Ireland. He is currently working on a series of novels set in the Viking age for Aria Fiction. Odin’s Game, the first in the series, was published in 2019.

P.S. For more guidance on accuracy and authenticity in historical fiction, make sure you download our guide below.